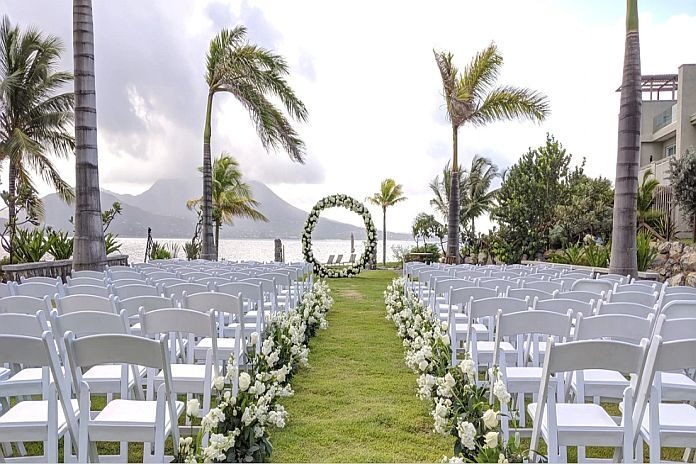 The exciting event was held at the St Kitts Marriott Resort on November 17, 2019. The chief executive officer (CEO) Natalie John gave an exceptional speech about her journey from being raised in a family home where both parents were entrepreneurs which contributed to her background in becoming the businesswoman that she is today.

She gave an enlightening story of how Dreamy Weddings was birthed in 1999 with a Vow Renewal request from a website, and we all know the internet was not as popular at that time.

The guests of the 20th-anniversary celebration included members of the Dreamy Group Board; the chairman of the Board of the St Kitts tourism authority, Nick Menon; the St Kitts team members of Dreamy Weddings; top vendors; close friends and family.

The 20th-anniversary celebration of Dreamy Weddings was hailed a success and received even more praise when Kelly Fontenelle-Clarke, North American marketing representative of Dreamy Weddings, shared details on the upcoming ‘Group Vow Renewal’ which will be hosted by Dreamy Weddings in partnership with the St Kitts tourism authority.

The Group Vow Renewal is set to take place on November 7, 2020, at Frigate Bay Beach, St Kitts and has the potential to be quite successful as there are hopes to make this an annual event.

The event is open to couples globally, whether they’re celebrating their first or fiftieth anniversary, and all are encouraged to participate and bring along their friends and family to join in on the remarkable and historic event of the first-ever Group Vow Renewal in the Honeymoon and Romance industry for St Kitts.

Nick Menon, chairman of the St Kitts tourism authority, congratulated Dreamy Weddings and CEO John on her hard work and accomplishments throughout her 20 years in the Destination Wedding Industry.

He also endorsed the ‘Group Vow Renewal’ and advised that the St Kitts tourism authority will be involved completely, ensuring that Dreamy Weddings has the support required to make the event a true success.

The event came to a close as John thanked the past and present staff and acquaintances who have contributed significantly throughout the 20 years Dreamy Weddings has been in business.

Dreamy Weddings First Ever Group Vow Renewal in collaboration with St Kitts Tourism Authority.The event is open to couples globally, whether they’re celebrating their first of fiftieth anniversary and all are encouraged to participate and bring along their friends and family to join in on the remarkable and historic event of the first ever Group Vow Renewal in the Honeymoon and Romance industry for St. Kitts.