The climax, apogee or perhaps apotheosis, and that is from his disciples perspective, of his diatribe that evening, was that Philip J. Pierre’s missive to Teo Ah King and which was dated September 4, 2015, constituted a bomb-shell of the Saint Lucia Labour Party (SLP) hypocrisy and dishonesty. And that letter to the Asian gentlemen was written by Pierre in his capacity of acting prime minister in the labour party administration.

Williams repeatedly referred to that letter as the bombshell. With many university degrees after my name and the experience of a parliamentarian of 17 years, the explosive content and potential as alluded to by Williams elude me. Where is the grenade to blow asunder his integrity, that of his government and that of his party?

From my erudite vantage point; I have discerned not a bombshell but a shell. And a shell implies nothingness, emptiness. In velonian style, it is the unadulterated quintessence of nihility. 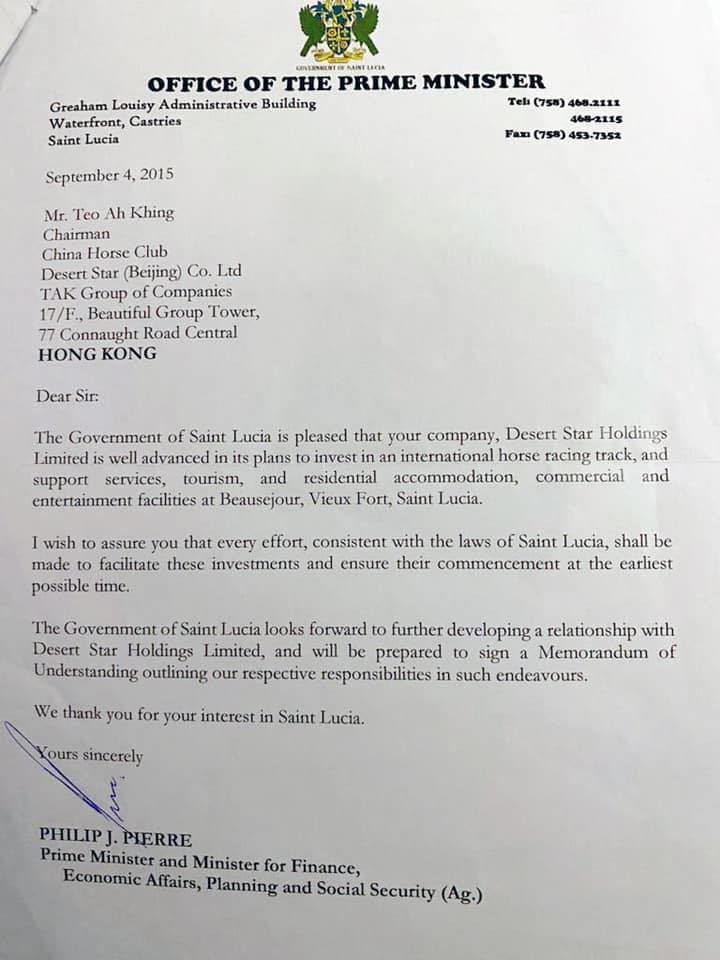 Williams discerned a dubious substance in its negative and infantile mode; his hacks/disciples imbibed and regurgitated an opportunistic portion of vile/bile. But what I rationally grasped from his utterances was intellectual dishonesty, dialectic speciousness and crass political scatology.

That letter was obviously a response to a communication between the parties in whatever the form; and that communication dealt with the southern development: specifically Vieux – Fort, collaterally the contiguous communities and villages. The proposal therein was comprehensive in its scope of development. It alluded to horse-racing track, support services, tourism, residential accommodation commercial and entertainment facilities. What the government had before it was a very comprehensive development proposal. The question that now intrigues me, is why Williams only alluded to the horse-racing track?

As I see it, that was a very attractive investment package. But then not all that glitters is gold. And it would be foolhardy for any government to dismiss or ignore such a proposal in a cavalier and irresponsible manner. It had to be looked into – to discover or unearth the myriad of details, commitments and expectations that these proposals normally come with.

It is to be noted that there was no agreement, framework or otherwise at that juncture. That letter was not even a memorandum of understanding which futuristically was alluded to in the last paragraph of that bombshell. For Williams further enlightenment it is to be further noted that a memorandum of understanding implies something less than a complete contract or agreement and functions only as evidence of the contract or agreement to be entered into. Subsequent thereto would be discussions, debates, proposals and counter-proposals and amendments. The distillation of all of this would eventually give rise to an investment proposal that would satisfy all parties.

As has been said the devil is in the details and conflicting details would have been worked out by the parties, if possible. And arising from all of this and through the instrumentality of compromises an agreement (frame-work or otherwise) a contract would emerge and to be executed by the parties.

And so, the questions that emerge at this juncture are:

Another interesting and intriguing question is this: Why didn’t the SLP government sign a Desert Star Holdings (DSH) Agreement?

It is my opinion and belief that Williams knows the reason why. As I stated earlier, the devil is in the details. The SLP team saw the devils in the details and realised this gift in the mouth would have been detrimental to the salubrious and comprehensive development of the south and its people. And so a decision had to be arrived at: a choice had to be made. It was a difficult choice. And so after several months of deliberation, the choice was made.

The choice was this. Saint Lucia or winning the 2016 general elections. The government of the Saint Lucia Labour Party, chose Saint Lucia and its people.

In their time, the United Workers Party (UWP) government had a choice to make; Saint Lucia or the continuance of governmental power. They chose the latter. Having done so, what they did not realise and are now realising is that you do not play games with the Devil with impunity. The negative impulses and motivations that led to their decision and which is reflective of certain nefarious traits and propensities are manifesting themselves in the posture they have assumed, as they try to placate and deceive the citizenry, that is anything but naïve. We may not have degrees but indeed we are steeped in the wisdom of the ages and generations.

What further is to be noted in that letter/bomb-shell is the caveat that consists of just six words. They are, consistent with the Laws of Saint Lucia. Pierre was not dumb, was not stupid, was not reckless, was not myopic, was not treasonous and was not avaricious. In the world of commerce/business, that letter was in the natural and salubrious order of things: in rerum natura est. And so to Williams, I say this: very cunning, very cunning is the creeping, viperous and reptilian spirit of evil.

In conclusion, the rhetorical questions asked and answers sought could be obtained or provided by your esteemed functionary, presently in the Office of the High Commissioner in the United Kingdom and from others in the machinery of your government.

You do have the power, for now.

Stronger Together: We are a global family

The national hypocrisy of ‘Tropical Trump’