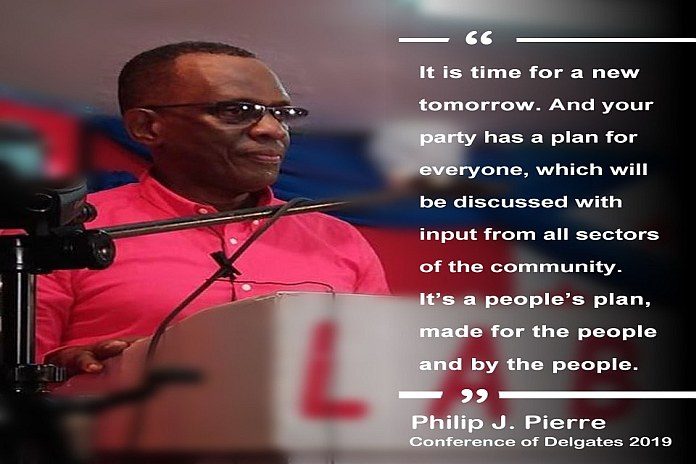 This May Day is a May Day of struggle against the COVID-19 pandemic and its repercussions which have destroyed the livelihoods of millions of workers throughout the world; in the forced lockdown of countries and their economies. It is a struggle for the thousands of displaced workers here in Saint Lucia, the majority in the tourism sector, many of them young persons, who now have to find the means to sustain themselves in the uncertain months ahead.

It is a struggle for our COVID-19 frontline workers who should be rewarded with bonus salaries for their work but who, with other public service workers in Saint Lucia, have to stand up to a government which has decided instead, to cut from the cash that it has to pay them for at least the next three months.

It is a struggle against the callousness of a government that is pursuing an anti-worker policy in dire economic times and at a time when the world is standing in international solidarity with workers. It is a struggle against a government which does not seem to understand that this policy is counter-productive since by reducing the disposable income it has to pay to its public servants, it will be reducing the amount of money circulating in the economy and will push the economy into further recession and cause more hardship to the other businesses on the island.

There are other alternatives to this misguided action by the government.

In presenting my Economic Recovery and Stimulus proposals last month, I recommended the following with respect to the payment of public servants’ salaries for the three months April – June: “The salaries for public servants should be financed by the issuing of new public debt or from existing surpluses. The international financial institutions will support this venture; banks will also be expected to support this undertaking with rollovers or fully subscribing to the new issued debt.”

Since this recommendation, the government has declared that it does not have surplus revenue to pay public servants because of COVID-19. However, on April 28, the International Monetary Fund (IMF) announced that it is providing emergency financial assistance to Saint Lucia, Dominica and Grenada to help address the challenges of COVID-19: “to help cover balance of payments needs, including fiscal space for essential health expenditures, income support to workers and cash transfers to households.” Saint Lucia is to receive US $29.2 or approximately EC$78 million.

This May Day is also a May Day of sadness, for the COVID-19 pandemic has cost the lives of tens of thousands of workers throughout the world. Many of those engaged in the front lines of the fight against the virus have succumbed to the very disease from which they are attempting to protect the public. Although we have not lost any lives here in Saint Lucia, and I pray that we will not, I want to extend my sincerest condolences to the families of all the Saint Lucian workers in the Diaspora who have died from COVID-19.

Despite the lethal shadow of this disease, this May Day is still a May Day of hope.

There is hope in the invaluable contribution that these workers, displaced by the pandemic, made to the maintenance of our economy before COVID-19.

There is hope in the valiant service being rendered by our doctors, nurses, firefighters, emergency officials as well as sanitation workers to keep us all safe from the pandemic.

There is hope in the untiring work of the water company employees to ensure that we receive water at this critical time.

There is hope in the hours of pressure and endurance patiently sustained by gas station attendants and supermarket workers as they strive to facilitate the crush of hundreds during the lockdown.

There is hope in the faithful toiling of our farmers and fishers to continue to provide food in the face of the uncertainty that it will be sold in the current circumstances.

There is hope in the enterprise shown by those who have devised new services to deliver goods to us to enable us to stay safely at home.

There is hope in the creativity of our youth, expressed in the renowned rhythms of musicians, in the remarkable verses of our young poets, in the excellence of our artists and sculptors, in the fascinating inventions of our young scientists at their science fairs, in the determined ambition of our budding IT and media activists, in the aspirations and commitment of the National Youth Council.

It is that belief in our youth that gives the Saint Lucia Labour Party (SLP) the inspiration that a sound foundation has been provided for a successful youth economy even with the uncertainties of COVID-19.

There is hope in the quiet professionalism of our teachers who are resourcefully responding to the sudden challenge of the introduction of e-education to our children this term.

There is hope in the selfless efforts of those trying to feed and house the homeless as the rest of the nation remains in their homes to avoid contracting the virus.

There is hope in the universal recognition of the importance and value of all these workers to the smooth functioning of our societies.

There is hope in the worldwide acceptance that it is these workers and not politicians who are the real heroes.

To all of them, I say a big thank you from the bottom of my heart and the bosom of my party. I want to thank you and congratulate you on what you have been and are accomplishing for us, for what you are giving to us, and for what you are teaching us.

I want to take this opportunity to extend special congratulations to the medical and other personnel of the Owen King European Union (OKEU) hospitals for their smooth and extremely efficient transition from Victoria hospital to the new OKEU hospital in record time last month. In your clinical execution of the transition, you demonstrated that Saint Lucians are quite capable of managing the delivery of our healthcare; and you vindicated the position of the Saint Lucia Labour Party that the hospital should not be placed in foreign hands. In your display of excellence, you also proved that Saint Lucians can rise to the challenge of a crisis and that Saint Lucian workers deserve to be celebrated.

As destructive as the pandemic is, I want to urge my fellow Saint Lucians to consider the fact that the virus according to science is more lethal to people with pre-existing conditions like diabetes and high blood pressure. This is the time to consider changing our eating habits and commence a regular exercise routine to reduce our chances of exposure to these non-communicable diseases.

As we extol the achievements of our workers, as we extend our commiserations at their losses, we also wish to reiterate our commitment to the workers of Saint Lucia on this unusual May Day.

In this extraordinary environment of COVID-19, the Saint Lucia Labour Party pledges that it will continue to fight for and support our workers in the struggle to survive and to reverse the economic shocks of COVID-19.

It was the Saint Lucia Labour Party that approved a 60 percent pay increase for our civil servants, doctors, nurses, and other public servants; hence allowing them to enjoy an improved standard of living.

It was the Saint Lucia Labour Party that first enacted laws to ensure that employees were entitled to – a holiday with pay, protection of their wages, and the right for everyone to vote at general elections. That is why we will be forever grateful to our first visionary leader George F.L. Charles.

It was the Saint Lucia Labour Party under the leadership of Dr Kenny Anthony that improved legislation to make trade union recognition compulsory once it was the wish of the majority of workers.

It was the Saint Lucia Labour Party that amended the National Insurance Corporation (NIC) legislation to ensure that contributions deducted by employers were protected by holding directors and business owners personally liable if payments were not remitted to the funds.

To this day, it is the Saint Lucia Labour Party that insists that our young people should receive appropriate education, and workers constantly re-engineer and improve their skills so that they may be adequately prepared for the jobs in the new technologically driven economy.

The Saint Lucia Labour Party pledges that it will continue to fight for and support our workers in the struggle to survive and to reverse the economic shock of COVID-19.

It was the Saint Lucia Labour Party that enacted Saint Lucia’s first Labour Code to ensure that workers were not unfairly dismissed without due cause.

As I wish all our workers well on this extraordinary May Day, I urge you to follow all the health protocols against COVID-19 so that you can remain safe.

Happy May Day to all the workers of Saint Lucia.