I have heard a recording of the spoken word of the [former] leader of the opposition in the Dominica House of Assembly. He was addressing a public meeting in the Roseau North constituency held by the United Workers Party (UWP). In short, the political leader of the opposition UWP was urging his membership not to accept the legitimacy of the Roosevelt Skerrit administration for it had stolen the December 6 election. He urged continued civil disorder and commotion inimical to a state of normalcy in Dominica.

As a man who has spent over 40 years in public life inclusive of many years on the bench of the Supreme Court of Trinidad and Tobago, membership of the House of Representatives there, and just over two years as minister of justice, I appeal to Lennox Linton to put Dominica first.

I empathize with any political leader who has led his party to an electoral loss. While his party first frustrated the issue of making electoral reform happen on two occasions when the matter was tabled in parliament, it did bring it forward in the end but a time when the legislature was due to be dissolved. Sadly, it was a case of too little too late.

An indisputable fact is that the UWP did participate in the general elections and challenged the governing Dominica Labour Party (DLP) in every constituency. It could have boycotted but chose to fight using the same electoral law, rules and processes used for the past 41 years and in eight successive elections since independence. This electoral law has seen changes of government in 1980, 1995, and 2000. It has seen the UWP win six seats in 2014.

The last political rally of the UWP at the New Town Savannah attracted a good crowd and when the votes were counted the opposition was supported by a creditable 39.5 percent of the electorate. International observer groups witnessing election day activities opined and reported them as free and fair.

Linton then claimed that some 8,000 Dominicans who live overseas were lifted into Dominica to vote for the labour party. This was then debunked by the Port Authorities whose records showed that a tad more than 2,000 visitors had arrived in the days preceding the holding of the poll. Then Linton raised afresh the argument that 1,000 names representing ineligible voters on the list swung the pendulum in the favor of the labour party in a number of selected marginal constituencies thereby denying the UWP the balance of power.

There remains the High Court and the option of electoral petitions available to candidates who did not win. However, the margins of the declared winners were sufficiently great in enough constituencies not to upset the legitimacy of the labour party government. Linton must accept this fact in the interest of the common good of Dominica. To do otherwise is to cast doubt on his credibility as someone aspiring to become prime minister. His stance to date; posts the holding of the poll is untenable and the membership of the party he leads must now step in and tell him to reset.

Electoral reform is high on the agenda of the new government. Linton must get on board this attempt to deliver a sanitized voters list and provide for voter ID cards and other matters he has reportedly advocated. 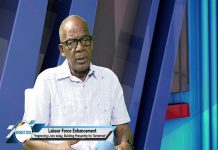 Guyana to focus on oil and gas opportunities for Guyanese youth