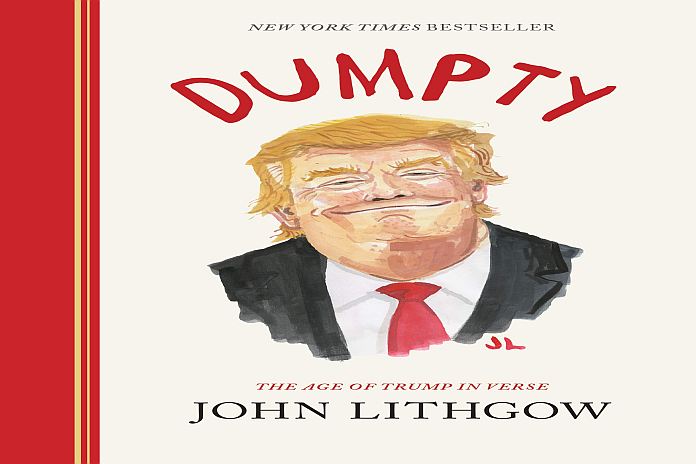 Some people who are being safe and staying home and looking for an amusing book may enjoy reading “Dumpty” by John Lithgow.

I thoroughly enjoyed Lithgow’s satirical political humor but also know that others may nor find the book as amusing; especially any FOD (Friend of Donald aka Friend of Dumpty). Lithgow is a best-selling author and prolific actor with two Tonys, six Emmys, two Golden Globes and two Oscar nominations. He also has appeared on Broadway 25 times as well as on strage in England.

Lithgow’s Mother Goose-inspired storytelling also includes verses about members of the media and even some foreign country leaders.

The book is creatively illustrated with never-before-seen line drawings by the very accomplished Lithgow.

The book might not be so hilarious when you step back and realize so many of Lithgow’s facts are true. I do not encourage FOD’s to buy or read this book and many will label it all as fake news, alternative facts or truth that is not the truth.

Rene A. Henry served in senior positions in the administrations of Presidents Ronald Reagan, George H.W. Bush and George W. Bush. He is the author of 10 books and writes on a variety of issues. Many are posted on his website, www.renehenry.com

The View from Europe: Time to repurpose the Caribbean public sector

Put digital technology to work ‘for those who need it most’,...