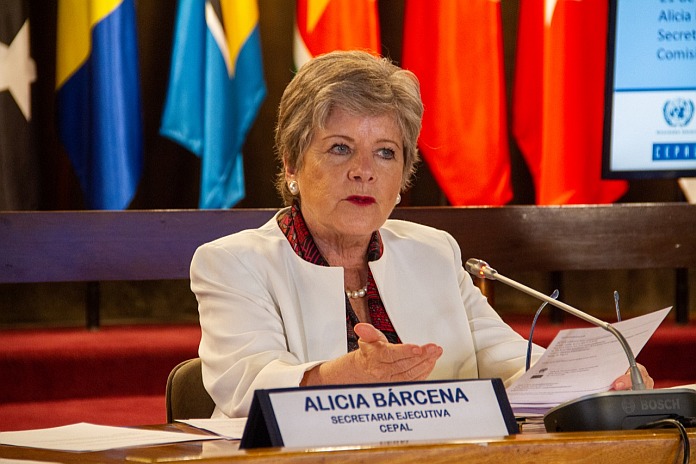 WASHINGTON, USA – Prime ministers, premiers, finance ministers, financial secretaries, and other high-level government representatives from 15 Caribbean countries on April 28, held day a virtual meeting with Economic Commission for Latin America and the Caribbean (ECLAC), heads of Caribbean regional organizations and representatives of other UN agencies in the subregion to discuss the economic impact of the COVID-19 pandemic on their economies, already besieged by both climatic and economic shocks, including heavy indebtedness and high exposure to natural disasters.

At the event, Alicia Bárcena stressed that Caribbean countries must increase their fiscal space and need more favorable financing conditions, notwithstanding their income per capita income levels, in order to face the pandemic’s effects.

“Considered as middle or high-income countries, Caribbean countries face a lack of access to liquidity on concessional terms”, Bárcena pointed out. “This is why policy proposals to support economic recovery with a people-centered approach are urgently needed”, she added.

All of them expressed concern at the highly vulnerable economic situation that the countries of the subregion were currently facing and urged ECLAC’s support of their advocacy in engagement with the international community for better access to grants and concessional financing, given their inability to service debt payments in the current circumstances.

In the words of prime minister Gaston Browne, “the economic burden for our countries has been unsustainable because of the high levels of debt. We don’t have the capacity for printing money and our policy instruments are very limited. What is required at this point is some level of support from international financial institutions, such as the International Monetary Fund  (IMF) and the World Bank. ECLAC can help us advocate and raise its voice for us”, he declared.

Describing innovative ways by which concessional financial assistance might be extended to Caribbean economies, he proposed that consideration be given to having credit extended to countries that have already invested in green technology. This he suggested could be applied through debt relief. He informed the meeting that Antigua and Barbuda was already exploring this option.

Camillo Gonsalves, minister of finance, economic planning, sustainable development and information technology of Saint Vincent and the Grenadines, identified the IMF Rapid Credit Facility (RCF) as an important mechanism that typically offered timely liquidity support free of conditionalities. He urged ECLAC support in promoting new financing instruments for the Small vulnerable economies of the Caribbean, and in advocating that valuable financial instruments such as the RCF remain available and unchanged during these challenging times. He also suggested that other innovative instruments such as that offering debt forgiveness to countries impacted by the EBOLA epidemic in Africa be considered in these similar circumstances created by COVID-19.

Minister Gonsalves also intimated that urgent practical interventions are needed to deal with liquidity challenges before they become issues of solvency. A strategic plan of support for the countries of the Caribbean in the short-term is therefore urgently needed.

Alicia Bárcena reassured the subregion that this dialogue’s results and key messages would be delivered to the United Nations secretary-general António Guterres, to be considered in his platform of advocacy on behalf of small island, middle income countries in his engagement with the international financial community for support.

In her welcome remarks to the Caribbean authorities, Bárcena emphasized that “we find ourselves in very challenging times. There can be no doubt that COVID-19 will have a profound and lasting impact on the welfare of our countries and our region for the next several months. We are putting the Caribbean first in everything we do”, she declared.

“It is commendable that every government has been putting the health and wellbeing of their populations first, and so I am happy to see the progress that has been made in controlling the spread of infection across the Caribbean. However, this effort has come at a very high cost, particularly in your subregion,  which already suffers a high level of vulnerability to both climatic and economic shocks, and with many of your economies already shouldering debt that is still very heavy, even with progress made to reduce external debt levels in recent years”, she added.

In her presentation, Bárcena further noted that the impact of the COVID-19 pandemic in the Caribbean countries has translated into both domestic and external challenges, the most significant of which include revenue and income losses, a drop in investment, rising unemployment, increased indigence and poverty, the failure of small and medium-sized businesses, and challenges to the financial system.

The external challenges include the near-total shutdown of air and cruise travel, dealing an immense blow to the tourism sector; stress in related supply chains (agriculture, construction, hotels, restaurants); a sharp contraction in larger economies, a downturn in commodities prices, the contraction of foreign direct investment (FDI) flows and remittances; disruption in transportation and global supply chains; risk aversion for external investors and financial turbulence, and restrictions on foreign exchange availability.

She recalled that, according to ECLAC’s latest projections, GDP growth in the Caribbean is expected to drop in 2020 by -2.5 percent, with a downward bias. She also noted that Caribbean countries are spending between one percent and four percent of GDP to tackle the COVID-19 crisis, with limited fiscal packages focused on social security programs, on loan deferrals and liquidity support for SMEs for increased health care spending on the testing and treatment of critical COVID-19 cases, and enhanced public health surveillance.

She noted that the high debt levels and interest payments limit public expenditure. She also highlighted the fact that “Caribbean economies have the highest debt ratios in the world, averaging 68.5 percent of GDP in 2019. Reductions in production and income along with increases in borrowing will further raise debt burdens. Debt is rooted in external shocks, compounded by the impact of natural disasters and inherent social and economic structural weaknesses”, Bárcena explained.

Given the nature of the assistance offered to the Caribbean by international financial institutions and development agencies for facing the pandemic in the short term, increased public debt is inevitable. Moreover, the recovery path of Caribbean countries will be more difficult than those of other economies given the characteristics of their productive structure and in light of the ever-present threat posed by the upcoming hurricane season, the Executive Secretary of ECLAC stressed.

Alicia Bárcena also emphasized that the crisis-induced by COVID-19 underscores the importance of ECLAC’s proposal for building resilience and reducing debt. ECLAC’s proposal links building resilience to debt reduction and recommends the creation of the Caribbean Resilience Fund (CRF), with a view to the creation of a globally coordinated debt deleveraging mechanism with a climate component to address the global debt overhang problem: standstills and debt moratorium.

ECLAC’s executive secretary stressed that relief for debt service payments can be extremely useful to supporting financing needs. “The ECLAC’s resilience fund proposal has the potential to offer much needed long-term relief, particularly to middle-income countries. Acceleration of the debt swap initiative and establishment of the ECLAC Climate Resilience Fund is needed, given the impact of the pandemic and the potential for an active hurricane season in 2020”, she said.

“We have heard from all of you that you need immediate action”, Bárcena told the prime ministers, premiers and finance ministers in her closing remarks. “Borrowing is not the answer to confront this crisis. Caribbean countries need grant support fast. There is need for urgent intervention to ensure liquidity”, she said.

“Let me say that we are very much on board. We are part of this. A game plan for the short term is needed and we have to work on this, together with CARICOM, ACS, and OECS. We will continue to advocate for this debt relief, for grants, for concessional funding for the Caribbean countries. And we will make sure that we can all address these issues with one voice, expressed clearly and openly. We heard you loud and clear.

“We will make sure that the secretary-general of the UN and his team receive this information with a view to their supporting us at the international level”, Bárcena concluded.