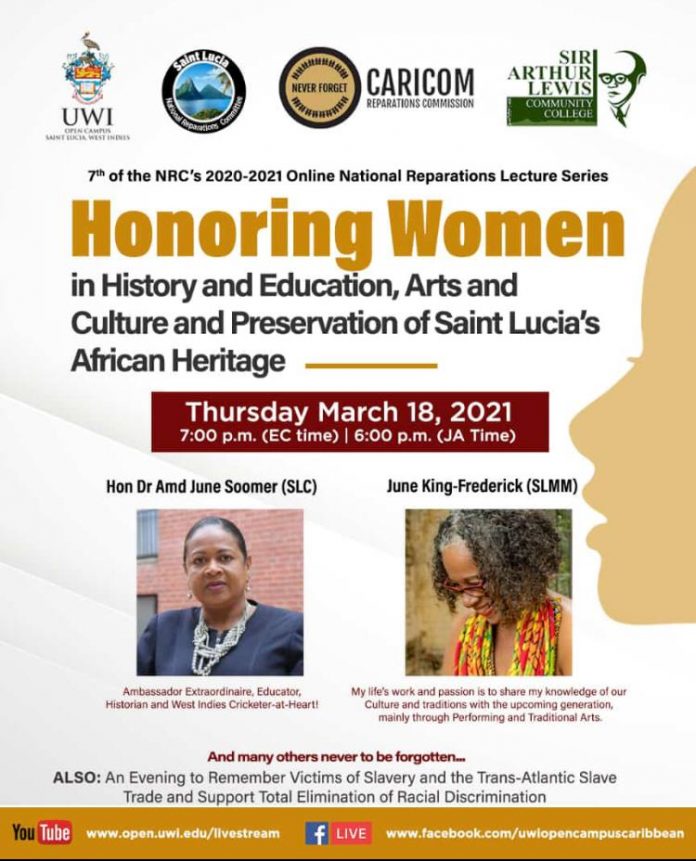 CASTRIES, St Lucia – The Saint Lucia National Reparations Committee (NRC) has disclosed the list of 32 women to be honoured this evening as initial inductees into a Virtual Hall of Honour for 100 Saint Lucian Women who’ve contributed to the island’s history and educational achievements, arts & culture and preservation of its Kweyol language and African Cultural Heritage.

The 32 women include 14 to be honoured posthumously and 18 others still active or retired after their significant but largely unheralded contributions and/or achievements.

NRC chair Earl Bousquet says: “The whole idea is to identify 100 Women to be honoured by and on March 8, 2025, the 50th Anniversary of International Women’s Day.”

He adds: “We’re looking, therefore, at dividing the remaining 68 women over the next four years at 18 annually, which will take us to the stage where our next objective would probably be a ‘Wall of Honor’ or ‘Wall of Fame’ for the chosen hundred.”

The NRC chair said: “None of the awardees were approached for permission or informed – until today – because they earned and deserve these awards and this is not a competitive process, nor one with the trappings of a national investiture ceremony.

“Instead, it’s meant to name and identify the first inductees, not on the basis of anything but the need to make a start with people fitting the criteria, so who’s not named tonight always has a chance of being named over the next four years.

“So, the hope is that this evening will spark that will ensure the meaningful stars in our galaxy who have not yet been heralded will be identified and honoured in the Hall of Honor and on the Wall of Fame.”

A case for teaching sexual risk avoidance – abstinence in schools