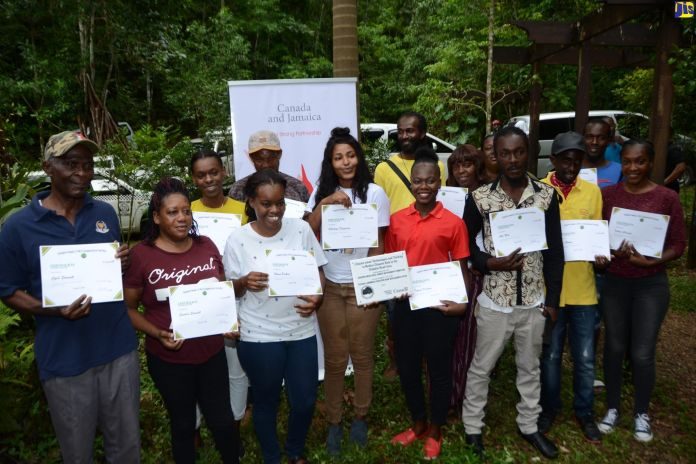 Newsome congratulated 20 graduates of the programme stating, “We trust and hope that your time was well spent and that you will take the knowledge gathered from the training and not only apply it to your own activities, but also share it with your family, friends and the wider community.”

The Farmer Field School was conceptualised by the Food and Agriculture Organization of the United Nations (FAO), and brought to Jamaica by ACDI/VOCA, a private non-profit organisation that promotes broad-based economic growth, higher living standards, and vibrant communities in developing countries.

The goal of the Farmer Field School is to help Jamaican farmers improve the quantity, quality and consistency of crops. The initiative employs a participatory learning method that has been used internationally to empower farmers through crop management decision-making, technology innovation and adoption.

Public relations officer of the Dolphin Head Local Forest Management Committee Co-operative Society, Norma Stennett-Gilzene said, “We have a designated five-acre plot that we worked on with our farmers in the community of Kingsvale. It is a school where you do not use books and pencils, you are not enclosed in any buildings, so your (tools) are your forks, spades and machetes,” adding, “We have trained over 40 persons overall. We do it as we see a need, and persons also call us to help out.”

Following Tropical Storm Erika (2015) and hurricane Maria (2017), Canada announced CAN$100 million in support of reconstruction and climate resilience efforts in the Caribbean region for the next five years, aimed at risk management, including preparedness, response, reconstruction and recovery.

“I am sure you will agree that the impact of climate change can already be seen and felt, not only in Jamaica, but across the region and we certainly anticipate more impact in the coming years,” Newsome said.

In July, Canada made a further contribution of CAD$3 million to the government of Dominica to support the operations of the Climate Resilience Execution Agency of Dominica (CREAD), and help make Dominica’s people, infrastructure and systems more resilient to natural disasters.

Canada is also supporting the development of Dominica’s Climate Resilience and Recovery Plan (CRRP), which will define Dominica’s priorities for the next 15 years.

Caribbean small island states are vulnerable to extreme weather events exacerbated by climate change. When natural disasters strike, Caribbean countries suffer the heaviest losses in the world relative to the size of their economies. This was evident after Tropical Storm Erika (2015) and hurricane Maria (2017). Dominica was severely impacted by both storms and was still recovering from Erika when Maria struck. The hurricane destroyed 90 percent of Dominica’s housing stock and resulted in the equivalent of US$931million (or 226 percent of GDP) in losses.

Canada’s contributions are helping the most vulnerable people, including women and children, to rebuild communities that are more resilient so they can be better prepared for natural disasters.