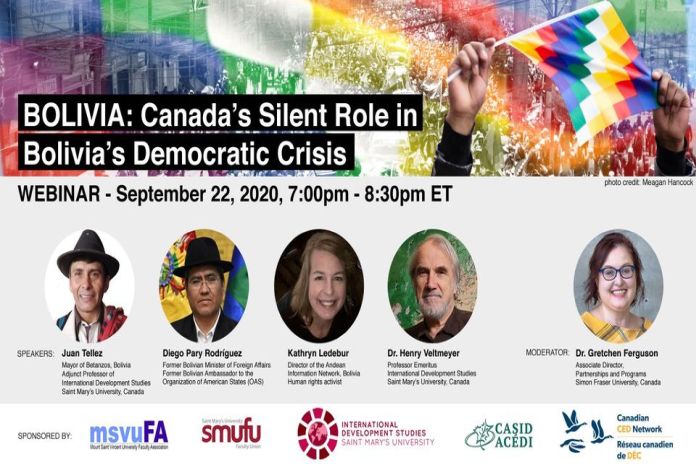 The moderator of the webinar is Dr Gretchen Ferguson, Associate Director of Partnerships and Programs at Simon Fraser University, BC

On November 10, 2019, the Organization of the American States (OAS), of which Canada is a member, published that there were irregularities in the October 20, 2019, Bolivian election. Hours later, the then Bolivian president, Evo Morales, leader of the Movement to Socialism (MAS) Party was ousted. The same day, Chrystia Freeland, the then Canadian minister of foreign affairs, commented, “We commend the invaluable work of the OAS audit mission in ensuring a fair and transparent process, which we supported financially and through our expertise.” The OAS’s audit has been discredited by several studies.

Henry Veltmeyer, professor Emeritus in International Development Studies at Saint Mary’s University, notes, “the interim (and unelected) government of Senator Jeanine Áñez, who is known for her exceedingly anti-indigenous prejudices and right-wing religious sentiments (‘The city is not for Indians. They had better go to the highlands…’), was formed in the context of a coup that deposed the democratically elected president Evo Morales, the first indigenous leader in history to have formed a government in modern times.”

Veltmeyer adds that the constitution obliges the interim government to hold elections within 90 days of taking office. But despite this, “the Áñez interim government has maintained power for over ten months, and during this period it has carried out massacres of more than 20 indigenous people through police and military operations and continues to systematically persecute political opponents in an effort to prevent the democratically elected but deposed party to participate in the elections. Canada has remained silent on these and other human rights abuses.”

With respect to Juan Tellez, being charged with sedition and terrorism on August 19, 2020, Kathy Ledebur, director of the Andean Information Network in Bolivia states, “The charges against Juan Tellez, Mayor of Betanzos, are a prime example of the campaign of acute political persecution of democratically elected MAS authorities. The persecution is without any evidence and without any basis besides a desire to skew the upcoming elections in Añez’s favour.” Human Rights Watch report, Justice as a Weapon: Political Persecution in Bolivia, supports Ledebur’s conclusions about the Añez government.

The elections in October are unlikely to be free and fair, given the actions of the Áñez interim government, especially if Canada continues its silence in the face of human rights abuses and undemocratic processes.