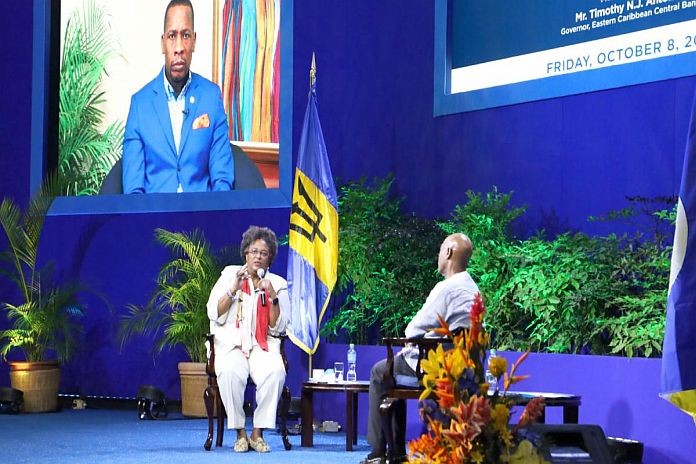 BRIDGETOWN, Barbados – Caribbean countries facing a perilous path back to growth due to the crises of COVID-19 and climate change need the global community to fundamentally reassess how concessional financing is accessed.

Prime minister of Barbados, Mia Amor Mottley made this call on Friday, October 8 at the President’s Chat, a discussion forum hosted by president of the Caribbean Development Bank, Dr Hyginus ‘Gene’ Leon.

Prime minister Mottley said countries needed fiscal space and better terms for financing as the region’s small economies were not able to handle the impacts of COVID-19 in the same way as advanced economies.

“The UN secretary-general told us that the average advanced economy expanded and was able to use 28 percent of GDP as a fiscal stimulus, the middle-income countries 6 percent and low-income countries less than 2 percent. So therein lies the story of really what has happened in the last 20 months – inequity at its worst and a strangling,” stated the prime minister.

Governor of the Eastern Caribbean Central Bank, Timothy Antoine, who moderated the discussion, shared that in the Eastern Caribbean Currency Union (ECCU), over $1 billion in additional debt was incurred as a result of COVID-19 last year, putting countries in “a dilemma … where we are trying to service debt and also serve our people.”

Prime minister Mottley held that against this background, Caribbean countries should be able to access financing without being held to criteria such as debt to GDP ratio that do not reflect the full reality.

“When you look at the fact that a lot of the accumulation of the debt that they’re concerned about in our region hasn’t come from corruption or hasn’t come from profligacy alone. It has also come from the reality of having to absorb shocks – decade after decade after decade, whether it was in the loss of productive capacity post WTO (World Trade Organization) or whether it was environmental as we’re seeing now, and the reality is that these things have now been judged against us,” she stressed.

Expanding on this point, Dr Leon noted that it was critical to unpack what underpinned the debt load in countries in the Region which are vulnerable to climate change related disasters.

“We talk about the 60 percent debt to GDP [ratio] but I think it’s equally clear those of us who have lived through hurricanes that a lot of that debt is maybe simply the money that you are borrowing to rebuild after a hurricane goes by.

So, we have to be able to make one of two arguments – either that the 60 percent is not the appropriate definition to use in countries that have high vulnerability, or we need to unpack the current debt to GDP ratios by parceling out those elements that are not of our doing. […] We should be able to unpack those so that you could genuinely say the relevant effective debt to GDP ratio that you should be accountable for is much, much less than what it is now,” he stated.

Mottley stated that this was especially relevant because the problems of climate change were not caused by Caribbean countries, stated: “If you’re going to ask us to be able to meet the needs of a climate crisis, then you cannot hold us to a 60 percent debt to GDP fiscal anchor. You’ve got to look for adaptation funds and preferably grant funds within the context of adaptation funds that will not add to our debt stock because we don’t have the room to add to it. Yet it is because of your … greed and wicked behaviour that the greenhouse gases are causing us these problems.” 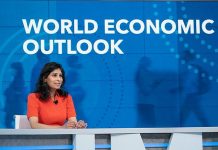