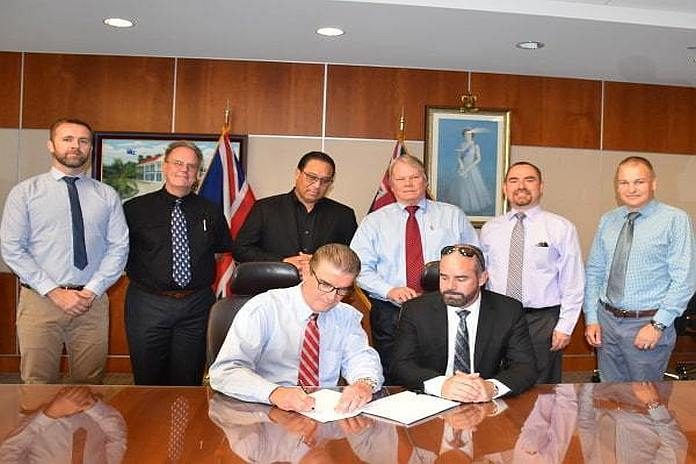 GEORGE TOWN, Cayman Islands (CNS) – The Cayman Islands Airports Authority (CIAA) has signed a deal worth some $30 million to expand and upgrade the runway and airfield at Owen Roberts International Airport (ORIA). This latest deal brings the cost of the whole airport project to around $100 million. Officials said the selected bidder includes two local companies — the Dart owned general contractor DECCO and Island Paving, along with IDL Projects, a Canadian firm that specialises in airport infrastructure.

The contract was signed earlier this week in the government building, with no press called to introduce the new CIAA partnership with the group, or for airport and ministry officials to answer questions about the project, which has not been without challenges and controversy. Instead, the new deal was outlined in a press release from the airport.

The airfield work is expected to start next month and will take around eight months to complete, the release stated. There are several parts to the project, including the expansion of the aircraft parking ramp in an easterly direction. The plans also involve the milling and re-paving of the existing runway surface and then the runway extension. To do that the ponds within the airfield perimeter will be filled in. This will also pave the way for the construction of a new robust airfield perimeter road.

The work will begin with the apron, followed by the runway rehabilitation and extension in January 2020. Despite the work taking place in the peak tourism season, the CIAA said it will not affect the airline schedules.

Neither the ministry of tourism or the CIAA have explained the previous announcements that runway work was going to start this summer after it had begun the tendering process and selected what appears to have been a different bidder. But after announcing it would be closing the runway for eight consecutive Tuesdays, starting in September, to do that work, the CIAA then abruptly cancelled the plan, blaming “unexpected extended contract negotiations”.

With the project back on track, however, tourism minister Moses Kirkconnell said it was “an extremely important next step on our master plan for the airport expansion” that would make the airport “more efficient and expedite departures and landings”.

Island Paving MD Barry Bodden, who commented in the release on behalf of the partnership selected, said they were highly competent companies with a track record of success on large scale infrastructure projects.

“We are committed to ensuring this project benefits the wider community through employment opportunities and building the local skillset for future maintenance and expansion works,” he said. “It is our intention to support local businesses, first and foremost.”