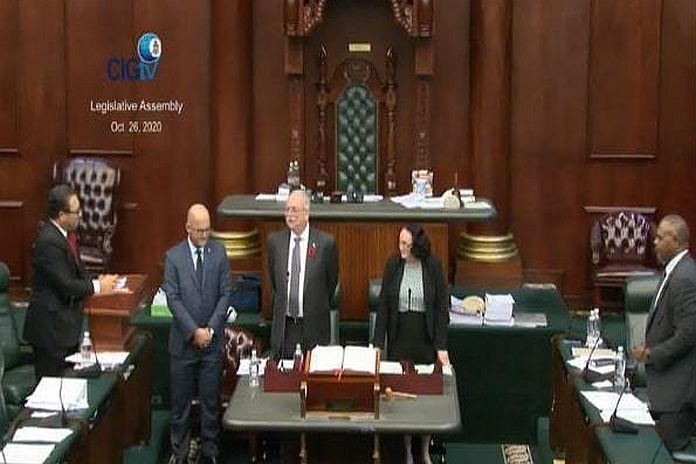 GEORGE TOWN, Cayman Islands (CNS) – Finance Committee members heard that government is now forecasting a $168.7 million deficit by the end of this year as a result of the COVID-19 pandemic. As he opened the committee hearing for the appropriation changes to this year’s budget, finance minister Roy McTaggart delivered the bad financial news that everyone was expecting. He said the changes to the 2020 budget arose from the mitigation and suppression of the virus.

As McTaggart, the PPM’s heir apparent, explained the appropriations, he pointed to the additional $40 million that had not been budgeted that was spent on COVID-19 testing, air-bridges between the UK and Grand Cayman, and other specific virus-related spending.

Another $23.1 million has been spent so far this year on financial assistance to the most vulnerable, as well as displaced tourism workers and non-Caymanians stuck here as a result of the border shut-down. $9.5 million has been spent on micro and small business relief efforts, while $3 million was used to buy laptops for students in public schools to reduce gaps in education equality exposed by the need for online learning during the pandemic.

A further $16.3 million was spent on operational support for Cayman Airways Limited to keep the national flag carrier afloat during these times of uncertainty.

Government also spent more than expected in areas unrelated to the pandemic, such as regulating the financial sector, the new West Bay Police Station, the John Gray High School project and creating the Cayman Islands Regiment.

Government’s accounts are also impacted by the government-guaranteed loan scheme for medium and large-sized businesses, where the government will guarantee or be liable for 50%, or $100 million, of a maximum loan facility of $200 million, as well as its own line of credit to the tune of almost $400 million and a loan to the Cayman Islands Airports Authority.

However, the finance minister has said that while the government will be temporarily outside the requirements of the public management and finance law regulations, the UK, which supervises the government’s fiscal management once it breaks the Framework for Fiscal Responsibility, has offered its support to the Cayman government, given the circumstances.

Most of the appropriations bill reflect increases in spending but there are decreases, though the former far outweighs the latter. While the tourism ministry offered up some of the biggest savings in some areas, totalling more than $15 million, the increased spending of more than $30 million still left the ministry in the red.