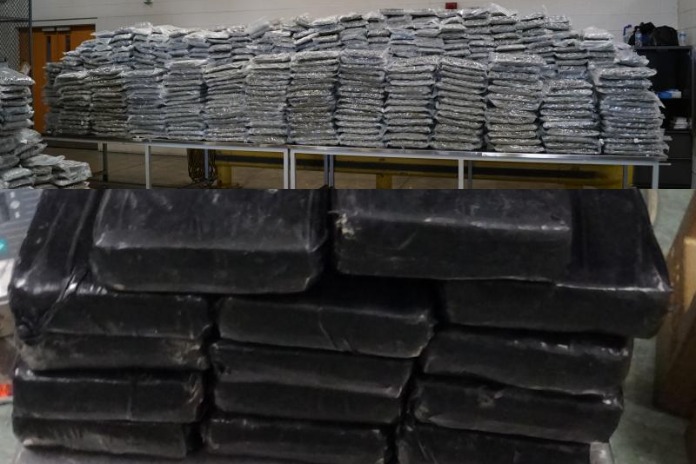 DETROIT / TEXAS, USA — Customs and Border Protection’s (CBP) Office of Field Operations seized more than a ton of marijuana at the Fort Street Cargo Facility on Wednesday, July 21, for the second time in a month; while CBP officers at the Veterans International Bridge intercepted a load of alleged cocaine, hidden within a 2002 Ford Focus.

The inbound tractor-trailer was referred to the secondary inspection area for a more in-depth examination of the cargo, which was manifested as aluminum caps. An x-ray scan yielded results inconsistent with the purported goods, and a subsequent physical inspection conducted by officers revealed 2,583 pounds of marijuana packed among several pallets.

The illicit cargo was subsequently seized along with the tractor and trailer.

“While CBP Field Operations continues to facilitate lawful trade and travel, drug interdiction remains an enforcement priority.” said Port Director Devin Chamberlain. “The men and women of CBP continue to work to keep dangerous and unregulated substances from hitting the streets of the US.”

The Detroit Field Office, which covers all ports of entry throughout Michigan, has experienced a surge in contraband since essential travel restrictions were enacted in March 2020 due to the COVID-19 pandemic.

$360K in cocaine at Veterans Bridge

“Our officers remain vigilant as they conduct their inspections and their efforts paid off with this significant narcotics seizure,” said Port Director Tater Ortiz, Brownsville Port of Entry.

The seizure took place on Monday, July 19, at Veterans International Bridge when a 23-year-old male United States citizen who resides in La Porte, Texas, attempted entry into the United States driving a 2002 Ford. The vehicle was referred to CBP secondary for further examination after a primary inspection.  While in the secondary inspection area, with the aid of a non-intrusive imaging system (NII), CBP officers discovered 20 packages hidden within the vehicle.  CBP officers removed the packages which contained a total of 46.73 pounds of alleged cocaine.

The estimated street value of the cocaine from the seizure is $360,400.

CBP officers seized the narcotics along with the vehicle, arrested the driver and turned him over to the custody of Homeland Security Investigations (HSI) special agents for further investigation.