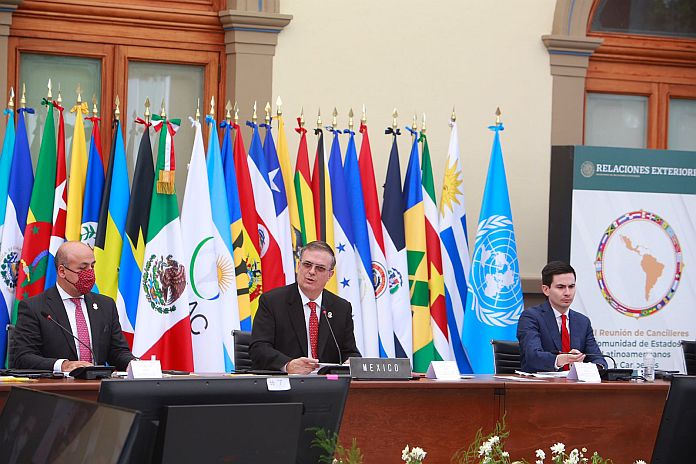 ST LUCIA / MEXICO – On July 24, as president Pro Tempore (PPT) of the Community of Latin American and Caribbean States (CELAC), Mexico hosted the 21stt meeting of CELAC foreign ministers in Mexico City’s Chapultepec Castle. The event was part of the commemoration of the 238th anniversary of the birth of the Liberator, Simón Bolívar.

The meeting was inaugurated by foreign secretary Marcelo Ebrard, and attended by the foreign ministry’s undersecretary for Latin America and the Caribbean, Maximiliano Reyes, and the director-general of Regional American Organizations and Mexico’s national coordinator for CELAC, Efraín Guadarrama, both of whom attended as the PPT representatives.

The meeting was a historic one in that the entire active membership of the Community participated (including the 6 Eastern Caribbean States), with 24 countries represented at the ministerial level, three by deputy ministers and five with special envoys. Also participating were the executive secretary of the UN Economic Commission for Latin America and the Caribbean (ECLAC), Alicia Bárcena, and the regional representative for Latin America and the Caribbean of the Food and Agriculture Organization of the United Nations (FAO), Julio Berdegué.

In his remarks, foreign secretary Ebrard said that the 21st CELAC ministerial meeting is the most important event with the highest attendance to take place since the COVID-19 pandemic. Although progress was not possible on some issues that needed a physical presence, important cooperation initiatives were achieved, such as the initiative of Mexico and Argentina to produce and package vaccines for the region; the donation and distribution of ventilators; the network of pandemic specialists; and the exchange of information and experiences organized by CELAC.

The secretary also made reference to the progress made in the dialogue between the Latin American and Caribbean region with other regions of the world that gave rise to meetings on science and technology, digital technology, and agriculture and medicine, among other achievements. He said: “If, before the pandemic, the idea was for CELAC to be the main instrument of cooperation in Latin America and the Caribbean, we are now clearly on the way to achieving that and consolidating our progress”. 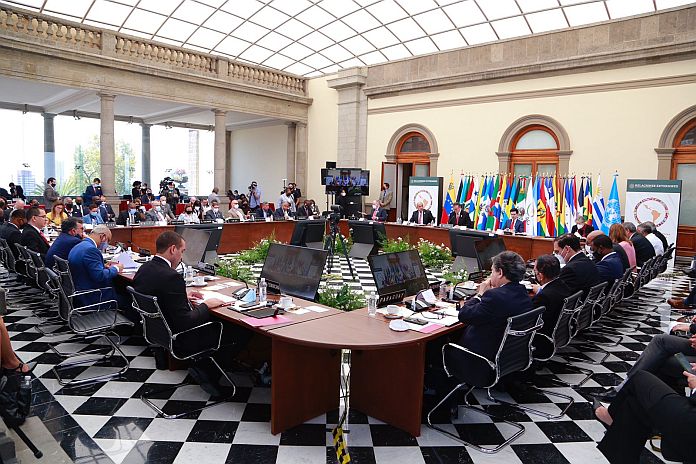 Mexico’s national coordinator, Efraín Guadarrama, reported on the achievements of Mexico’s Pro Tempore Presidency for the 2020-2021 period, highlighting the Community’s revitalization as the most important forum for political dialogue and agreement in the region; the creation of a regional COVID-19 strategy; and the signing of the Convention establishing the Latin American and Caribbean Space Agency (ALCE).

ECLAC executive secretary Alicia Bárcena discussed the progress of the comprehensive plan for health self-sufficiency, which seeks to increase the region’s production and distribution of COVID-19 vaccines and drugs. The FAO regional representative for Latin America and the Caribbean, Julio Berdegué, gave a progress report on the FAO-China South-South Cooperation Agreement on Food Security, which aims to help with the response to and recovery from the impact of COVID-19 on rural livelihoods and food systems in CELAC countries.

At the conclusion of the meeting, it was agreed to end the CELAC reflection process in order to revitalize and strengthen the community, and CELAC and Eclac signed a declaration creating a CELAC Comprehensive Disaster Response Fund.

Lastly, the undersecretary for Latin America and the Caribbean, Maximiliano Reyes, closed the event, highlighting the historical nature of the meeting commemorating the 238th anniversary of the birth of Simón Bolívar, the Liberator.

CELAC is an intergovernmental forum for dialogue and political coordination. Its members include the 33 countries of Latin America and the Caribbean. It is committed to gradually moving towards the region’s integration, while striking a balance between unity and the political, economic, social and cultural diversities of the 600 million inhabitants of Latin America and the Caribbean. Mexico is president Pro Tempore of CELAC for the 2020-2021 period.

Here, you can check the Special Communiqué of the Pro Tempore Presidency of the Community of Latin American and Caribbean States on the conclusion of the Reflection Process.

Americans gave up citizenship in record numbers in 2020, reports tax...