Caribbean countries are being warned by the government of the United States of America and US writers that they should limit their dealings with China. In the course of these warnings, several allegations are made, suggesting sinister Chinese motives and even corrupt relations between Chinese institutions and local politicians who get personal “side benefits”.

The latter claim has been made by Evan Ellis, a member of the policy planning staff at the US State Department, in a recently published article entitled, ‘Latin America and China: Choosing self-interest’. It should be noted that Ellis was writing “personal observations” with the disclaimer that they do not “necessarily represent the view of the State Department or the US government”.

For Caribbean countries, the bottom line of the relationship they develop with global powers is the benefit that they derive, recognising that each of the global powers is trying to establish influence over them in a range of areas.

What makes China more attractive to regional governments today is that China is demonstrating, by its actions, that it is willing to contribute to the development needs of Caribbean countries. Meanwhile, other global powers have either withdrawn assistance or limited it to areas that are marginal to economic development.

The most telling example of this is China’s loans for infrastructural projects such as airports, seaports, bridges, and roads. Typically, Chinese loans for such projects are repayable over 20 years at less than three percent interest with a five-year moratorium on the repayment of capital. No other government or international financial institution is willing to lend money on such advantageous terms. In fact, most Caribbean countries are prohibited from access to concessional financing by narrow rules drawn-up by Western governments.

Faced with the need to deliver economic and social benefits for their people, Caribbean governments consider it in their countries’ interest to pursue Chinese funding. They would hardly accept warnings not to deal with China from countries that do little or nothing to advance their economic betterment.

One of the fallacies, promoted by Western writers is that China “lures” Caribbean governments into “asymmetric deals by offering personal benefits (to government negotiators) in exchange for overall terms favourable to Chinese companies”. The reality tells a different story.

Often Caribbean governments have had to pursue Chinese government loans, facing rejections before any are approved, and many remain refused. China is interested in getting its loan capital repaid with interest.   China wants the money. It has millions whose standard of living they have to improve and millions of mouths which they have to feed. Doing so is crucial to the maintenance of political stability and China’s form of government.

As for side contracts to government negotiators, there has been no evidence of this in the Caribbean. For their part, Chinese officials are keenly aware that the penalty is fatal in their country for any corruption of which they are convicted.

To be fair, the Chinese government has also been more generous in providing grants than other global powers. These grants, usually for social welfare projects such as housing and rebuilding after disasters, certainly earns China the appreciation of the recipients and, therefore, sympathy and gratitude in the international community. Instead of decrying these grants, other global and medium-sized powers should emulate China. They should give Caribbean countries the option of choosing a more beneficial partner. If not, Caribbean countries are constrained to choose the most willing.

In his article, cited earlier, Evan Ellis declares, in condemnation, that “Chinese companies are notoriously inadequate, for example, in providing opportunities for locals in senior management”. Perhaps he is unaware that North American and European companies, operating in the Caribbean, follow the same practice. It is as unjustifiable for Chinese companies as it is for North American and European ones. They should all be criticized as should those Caribbean governments that allow it, particularly in fields where educated and trained Caribbean persons exist.

Two of the areas in which Caribbean countries are urged not to allow Chinese participation are telecommunications and surveillance.

According to Ellis, this is so sensitive that “such presence could put at risk the ability of its (the Caribbean’s) politicians and administrators to make effective and independent decisions”.  However, the Caribbean’s telecommunications have been in the hands of US, Canadian and European institutions for decades, and, in most cases, they still are. Therefore, the question is begged: why is it more in the Caribbean’s interest to allow participation in its telecommunications by North American and European companies than by Chinese ones?  Part of the answer might be provided by Ellis who says that participation of Chinese companies would make it difficult for other partners such as the US.

The Caribbean region has always been the involuntary pawn on the chessboard of global politics, shuffled around and sacrificed for the interest of one player or another. All who have come to the region have done so in their own interest. At times, the region has gained from the involvement of outside powers because, in satisfying their own needs, those powers left some good to countries in the area. But, always, the peoples of Caribbean countries knew that their own interest was ancillary to the interests of others.

Today, in dealing with China and other global powers, no Caribbean country is seeking to advance the interests of one of those powers over the other.

The region has always been interested, without discrimination, in seeking fair and equitable involvement by other nations from which there is mutual benefit. In pursuing this objective, concessions have been given, pride has sometimes been swallowed, and difficult choices have been made. But, importing rivalry between global powers is neither part of the Caribbean’s agenda nor in its self-interest. 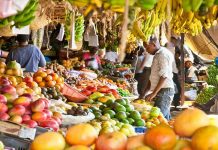 Why sustainable food systems are needed in a post-COVID World