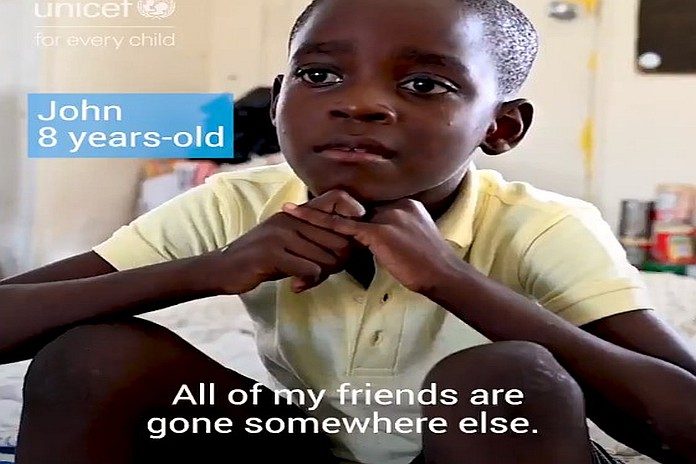 GENEVA, Switzerland – The number of Caribbean children displaced by storms has risen approximately six-fold in the past five years, the UN Children’s Fund (UNICEF) reveals in a new report released on Friday.

Catastrophic tropical cyclones and hurricanes uprooted an estimated 761,000 children in the region between 2014 and 2018, which also was the hottest five-year period on record.

The preceding five-year period, 2009 to 2013, saw some 175,000 Caribbean youngsters displaced. “This report is a stark reminder that the climate crisis is a child rights crisis,” said UNICEF executive director Henrietta Fore.

“Children in storm and flood-prone nations around the world are among the most vulnerable to having their lives and rights upended. They are already feeling the impacts of climate change, so governments and the international community should act now to mitigate its most devastating consequences.”

UNICEF recalled that the Caribbean was slammed by a series of catastrophic tropical cyclones or hurricanes between 2016 and 2018, including four Category 5 storms. The agency has been providing lifesaving assistance for children and families across the Caribbean affected by the 2017 Atlantic hurricane season.

More than 400,000 children were displaced that year alone. The report, Children Uprooted in the Caribbean: How stronger hurricanes linked to a changing climate are driving child displacement, warns that without urgent climate action, displacement levels are likely to remain high in the coming decades.

UNICEF is calling on governments to put children at the heart of climate change strategies and response plans and to protect them from its impacts.

Authorities also are urged to provide displaced children with protection and access to education, healthcare, and other essential services, among other recommendations.

John was separated from his home, friends and toys after Hurricane Dorian devastated parts of the Bahamas. UNICEF is helping children deal with increasingly extreme weather across the Caribbean. #COP25 #ClimateAction pic.twitter.com/eHnFgKsEzQ

The Bahamas tourism update and state of business