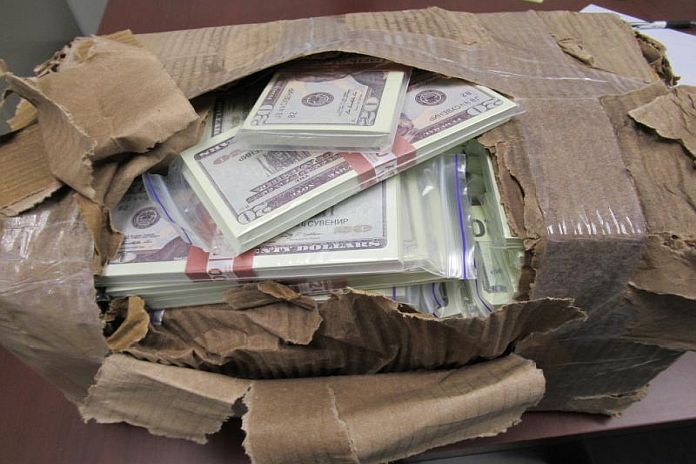 On Friday night, October 23, CBP officers at the IMF inspected a parcel that was coming from Ukraine and heading to Joliet. The officers inspected the shipment to determine the admissibility of the parcel and contents. The shipment was manifested as prop money and totalled $298,160.

On Saturday, October 24, officers seized another package from Ukraine. This time the package was headed to Staten Island, NY. The shipment was again listed prop money and totalled $272,220. Each of the counterfeit bills were $20 bills. Even though these counterfeits were listed as prop money, it is a violation of federal law to reproduce currency. Violators can be arrested. The counterfeit currency was turned over to Homeland Security Investigations and US Secret Service for investigation.

“The importation of counterfeit currency can pose a threat not only to the United States economy but our national security as well,” said Shane Campbell, Port Director-Chicago. “The illegal importation of this amount of counterfeit currency has the potential to be a very serious criminal act. I give the officers credit for helping to maintain the integrity of our system and protecting the citizens of the United States.”

According to the Secret Service, special agents and investigative analysts from around the country continue to work closely with state and local law enforcement partners to minimize risks by informing the public and apprehending those responsible for passing counterfeit currency. Both consumers and retailers can protect themselves from inadvertently receiving counterfeit currency by quickly glancing at the note.

CBP conducts operations at ports of entry throughout the United States, and regularly screens arriving international passengers and cargo for narcotics, weapons, and other restricted or prohibited products. CBP strives to serve as the premier law enforcement agency enhancing the Nation’s safety, security, and prosperity through collaboration, innovation, and integration.

Why positive peace is transformational