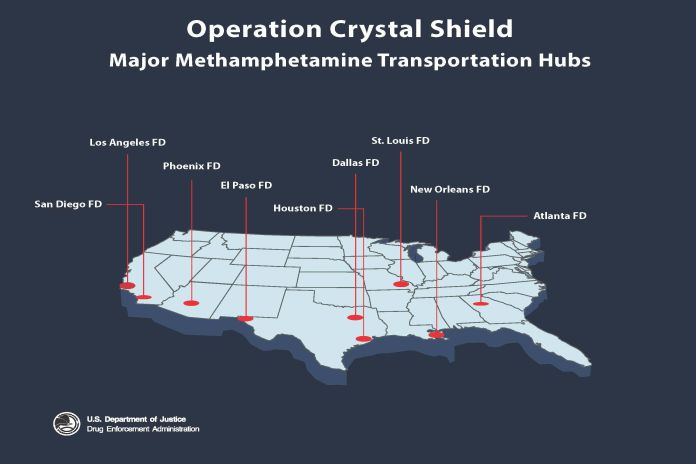 “Methamphetamine is a brutal drug linked to violent crime and responsible for far too many fatal overdoses,” said attorney-general Barr. “The astounding results of Operation Crystal Shield clearly demonstrate the commitment by the DEA and our state and local partners to prevent this deadly drug from reaching the streets of our communities. Prosecuting individuals who traffic these poisons remains a top priority for president Donald Trump and the entire Department of Justice.”

“In the months leading up to the launch of Operation Crystal Shield, communities across the United States experienced a surge of methamphetamine,” said acting administrator Shea. “The COVID pandemic locked down many communities and impacted legitimate businesses, but the drug trade continued. Under difficult conditions, DEA – along with our federal, state, and local partners – never stopped working as we helped stem the flow of methamphetamine onto our streets, even as violent drug traffickers sought new ways to smuggle it into the United States. The success of Operation Crystal Shield reflects the devotion of DEA and our partners to protect our communities from the scourge of drug trafficking and violent crime under any circumstances.”

Under this operation, DEA directed enforcement resources to these cities where methamphetamine is often trafficked in bulk and then distributed across the country, and partnered with other federal, state, and local law enforcement to interdict these shipments and target the transportation networks behind them.