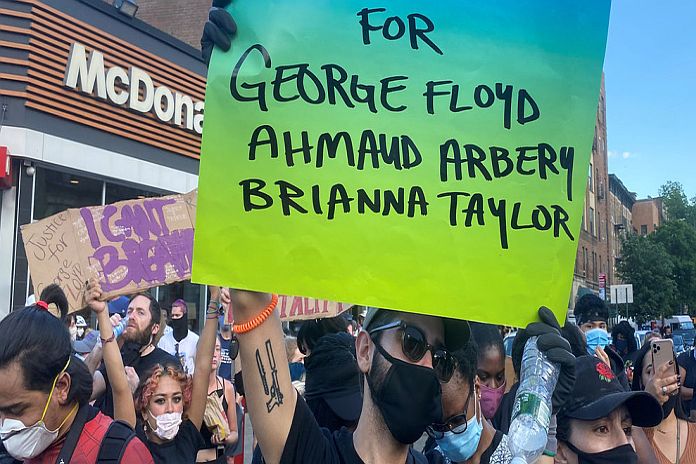 GENEVA, Switzerland — The grievances at the heart of the protests that have erupted in hundreds of US cities need to be heard and addressed if the country is to move on from its tragic history of racism and violence, UN High Commissioner for Human Rights Michelle Bachelet said on Wednesday.

“At all times, but especially during a crisis, a country needs its leaders to condemn racism unequivocally; for them to reflect on what has driven people to boiling point; to listen and learn, and to take actions that truly tackle inequalities,” she said.

The protests, which began in response to the killing of an African American man, George Floyd, while in police custody on May 25, have continued, spreading to more than 300 US cities.

There are credible reports of unnecessary and disproportionate use of force by law enforcement officers, including indiscriminate and improper use of less-lethal weapons and ammunition. Tear gas has been used to disperse peaceful demonstrators and rubber bullets and pepper balls have been fired at demonstrators and journalists who did not pose an imminent threat of serious injury. These tactics have been used in some instances in which many victims were retreating.

There have been at least 200 reported incidents of journalists covering the protests being physically attacked, intimidated, or arbitrarily arrested, despite their press credentials being clearly visible.

“What has been happening is an unprecedented assault on journalists. In some cases, they have been attacked or even arrested while on air. It is all the more shocking given that freedom of expression and of the media are fundamental principles in the US, central to the country’s identity,” Bachelet said. “I call on the authorities at all levels to ensure the message is clearly understood – reporters must be able to do their important work free from attacks or repression.”

Several people, including a federal law enforcement agent, have died in the unrest, dozens have been injured and numerous properties destroyed. Police officers have been targeted and injured in a number of locations.

“As I have said before, violence, looting, and the destruction of property and neighbourhoods won’t solve the problem of police brutality and entrenched discrimination. I repeat my calls to protesters to express their demands for justice peacefully, and for the police to take the utmost care not to enflame the situation through the use of excessive force,” the High Commissioner said.

Bachelet called for all actions by the authorities and protesters that have led to death or injury, including of law enforcement officials, to be subject to independent, impartial and transparent investigations.

She also voiced deep concern at statements that have sought to label protesters as terrorists, or to delegitimize the mass outpouring of grief and peaceful protest by pointing to violence or destruction of property that has occurred in many locations.

“There can be no doubt as to what or who is ‘behind’ these protests. We have seen thousands upon thousands of peaceful protesters, of diverse backgrounds, taking to the streets to demand their rights and to call for change. Many police officers, as well as National Guard troops, have also responded peacefully to those gathered on the streets,” Bachelet said.

“Structural racism and police violence are of course found across the world,” the High Commissioner said. “The anger we have seen in the US, erupting as COVID-19 exposes glaring inequalities in society, shows why far-reaching reforms and inclusive dialogue are needed there to break the cycle of impunity for unlawful killings by police and racial bias in policing.”

“In addition, there must be a profound examination of a wide range of issues, including socio-economic factors and deep-seated discrimination. To move forward, communities must be able to participate in shaping decisions that affect them and be able to air their grievances,” Bachelet said.

The View from Europe: Cuba re-embraces Russia as US sanctions bite