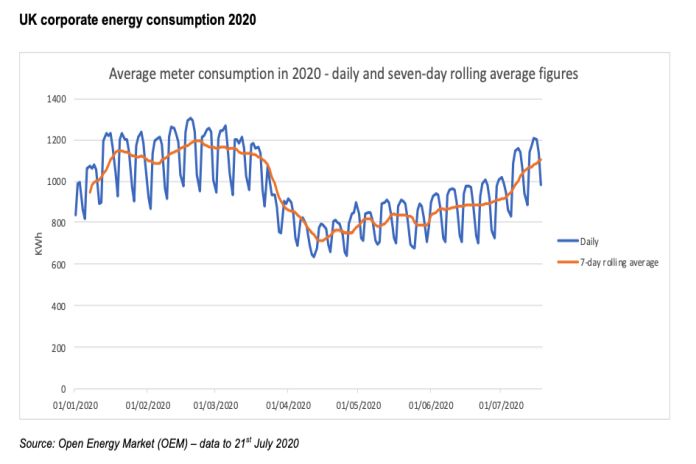 LONDON/TEXAS – New data from corporate energy specialist Open Energy Market (OEM) offers a rare real-time demonstration of how Britain is getting back to work as lockdown lifts,World Oil reported July 29, 2020.

Corporate energy consumption was down 40 percent at the peak of the COVID-19 crisis but the latest figures (to 21st July) are only eight percent below the level they were just prior to lockdown. There has been a sharp rise in the past two weeks as restrictions have relaxed and more people have returned to work. OEM, backed by investor Calculus Capital, is a trading platform that enables a wide range of companies and organizations to forecast energy use and buy cost effectively.

Taking consumption from an anonymized sample of 500 companies, across a wide spectrum of industries (from hospitality to manufacturing) and using a seven-day rolling average to smooth out the impact of weekends and public holidays, OEM has been able to chart the impact of COVID-19 on the corporate sector on a like for like basis with the previous year.

Chris Maclean, chief executive officer of OEM, said: “As you would expect, there was a sharp drop in consumption as organizations entered lockdown. Many companies with staff working from home or furloughed, still had some consumption – keeping lights on and servers running – but clearly not at anything like the same levels.

“The lowest point was the seven-day period ending April 14 – the Tuesday after the Easter weekend around the height of COVID-19 deaths and the peak of the crisis. That was 40 percent lower than levels at the beginning of the year and 60 percent lower than we recorded at the same time last year. We’re still 11 percent below this time last year and eight percent below pre-lockdown peaks, but this is a rare real-time indicator of the health of the UK economy and shows that Britain is in convalescence and recovering.”

Houston (Bloomberg) reports the world’s three biggest oilfield service companies wrote down the value of their assets to the tune of about $45 billion during the past year as customers engaged in severe spending cutbacks, according to Morgan Stanley.

The combined write-offs, half of which stem from what were supposed to be blockbuster M&A deals, almost equal their combined market capitalization, analysts including Connor Lynagh wrote in a note to clients on Wednesday.

“The industry now appears to be in a significant capacity reduction and repair phase that we think will not quickly reverse,” the analysts wrote. “From a supply-side perspective, we think this effectively marks the bottom of the cycle.”

The hired hands of the oil patch who map underground pockets of oil and drill wells have taken much of the brunt of the worst-ever crude crash. Schlumberger Ltd., Halliburton Co., and Baker Hughes Co., are shrinking headcount while emphasizing a greater push toward digitalization in hopes of boosting profits as customers eschew big-dollar drilling projects.