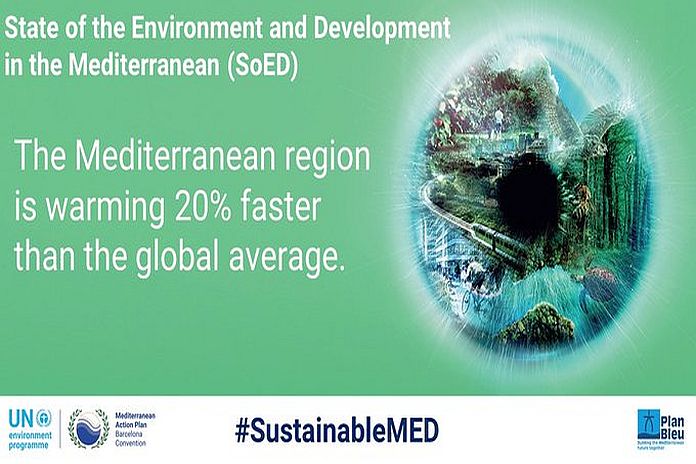 MEDITERRANEAN – Around 15 percent of deaths in the Mediterranean are attributable to preventable environmental factors, a new UN Environment Programme (UNEP) report released on Wednesday has revealed.

In 2016, more than 228,000 people died prematurely from exposure to air pollution, according to UNEP’s State of the Environment and Development in the Mediterranean (SoED).

Moreover, unless urgent and resolute action is taken to halt current trends, environmental degradation could have serious and lasting consequences for human health and livelihoods throughout the region.

With hundreds of millions of visitors each year, the Mediterranean is one of the world’s most coveted tourism destinations and busiest shipping routes.

Every day it is polluted by an estimated 730 tonnes of plastic waste, which threatens biodiversity along with the more than 1,000 non-indigenous species that live below the water, said ILO.

Furthermore, the overall region is warming 20 per cent faster than the global average.

SoED also indicates that the region, which is home to more than 512 million people, is not on track to achieve the Sustainable Development Goals (SDGs) by 2030.

To tackle environmental degradation, the report identifies several actions, including phasing out harmful subsidies – such as those for non-renewable fuels, and groundwater extraction – and recommends instead, incentivizing sustainable options.

It calls for all sectors of Mediterranean economies to prioritize development, not just those directly concerning the environment, and implement degradation preventation measures – noting that they cost less, and lead to better environmental and social outcomes than clean-up and curative action.

And finally, SoED advocates for enforcing national legislation provisions on accountability and legal action if necessary, as well as strengthening legal enforcement mechanisms, including those under the region’s Barcelona Convention, on protecting the marine environment, and its Protocols.

“By shedding light on the mistakes of the past, the report’s findings can guide a green renaissance in the Mediterranean”, said Gaetano Leone, Coordinator of the UNEP/MAP-Barcelona Convention Secretariat.

“Embarking on greener development paths now can halt the environmental degradation trends and salvage hard-won achievements in the implementation of the Sustainable Development Goals”, he added.

Last published in 2009, SoED provides a comprehensive assessment of the environment and development in the Mediterranean region.

It was produced by Plan Bleu, a regional centre of the UNEP Mediterranean Action Plan (MAP), involving 21 coastal countries of the Mediterranean and the European Union, so they can cooperate in protecting marine and coastal environments for sustainable development.