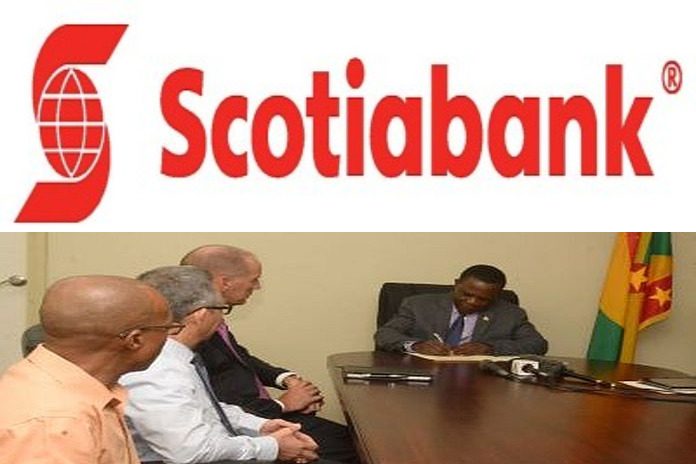 The planned acquisition was first announced in 2018 and in September this year, the Eastern Caribbean Central Bank (ECCB) in consultation with the monetary council approved the application for the transfer of Scotiabank’s assets and liabilities in Grenada and five other Caribbean countries.

Dr Mitchell who is the current chairman of the ECCB Monetary Council, said it was important for Grenada to show leadership in the conclusion of the matter.

“I wanted to signal that Grenada is the first to sign that vesting order. I felt this initiative was important to demonstrate that we have in fact settled the issues that were concerning to us. Having sat at the table of the Monetary Council and having to confront all of the issues that faced us with regard to the sale of Scotiabank, I did my best to counsel others to approach this with an understanding of the importance of finance to the region and the implications it has for the regional banking system, knowing the challenges that we face.”

The prime minister spoke of the importance of banks in Grenada and other Caribbean countries having international relations with powerful banking institutions.

“I see Republic Bank, given its history of banking relations with international institutions, as an important factor in the decision made in Grenada’s case. Also, for the Monetary Council when we debated the issue, we felt that was a key factor.”

He also underscored the importance of the acquisition from a regional perspective.  “This has to be seen as a unified approach, especially in the context of the ECCB; it is not just about individual countries.

That’s why we have been counselling our friends throughout the region and Antigua and Barbuda in particular [and] that we have to do this together.”

Government has earned just over two million dollars in taxes from the acquisition deal. More importantly, Dr Mitchell said protecting the rights of workers was a key consideration in giving final approval to the acquisition and he spoke of consultation with the Technical and Allied Workers Union in ensuring fair treatment of Scotiabank’s employees.

They all expressed confidence that the interest of workers was well protected in the acquisition. A Memorandum of Understanding (MOU) between Scotiabank and TAWU was signed in September, setting out provisions to safeguard the rights of workers with respect to continued employment or severance.

The role of government in facilitating the transaction was also recognised and assurances were given that customers would continue to experience excellent customer service and appreciation for customer loyalty over the years.