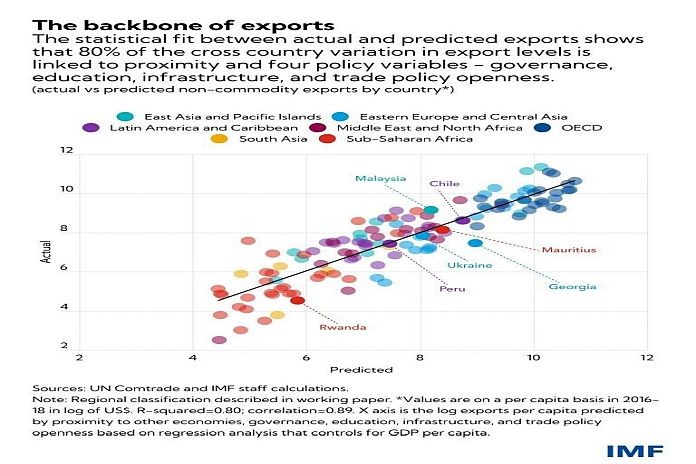 As the world’s biggest copper producer, Chile’s shipments of the metal meet around one-third of global demand and represent about half its goods exports.

But beyond mining’s dominance, Chile’s trade flows are more varied and complex than they may appear, with significant exports of vehicles, pharmaceuticals and telecommunications equipment. And according to a recent IMF staff paper, the Andean economy is among those that shine as a role model for diversification policies.

By looking beyond commodities, the research shows that economy-wide policies such as governance and education help foster diverse exports more than narrowly targeted industrial policies, a finding that can better guide nations aiming to expand their international trade.

The examination of 201 countries and territories goes beyond the economic complexity indices that have traditionally been used by economists. Those proxies for the productive capability of a given economic system have strong sensitivity to commodities, which can distort their accuracy.

For a more nuanced read, staff research proposes new ways to gauge diversity and complexity of national exports and suggests how economy-wide policies can foster such variety. Economists call these horizontal policies because they apply broadly across a country instead of targeting single sectors. The approach also takes stock of an economy’s geographic proximity to trade partners, and how it affects exports excluding commodities like metals or oil.

This lens offers policymakers lessons for how they can better support more multifaceted trade, a common objective in emerging and developing economies because it’s associated with less volatile economic output and faster long-term expansion.

The methodology shows a clear a link between the non-commodity exports that aid diversification and complexity and four economy-wide variables that help support them: governance, education, infrastructure, and open trade. Improving those areas helps to diversify by creating conditions that make it possible to boost complex or higher-value-added exports.

This is significant because demonstrating how economy-wide policies do explain diversification challenges the belief that industrial policies, meant to support specific industries, offer the best way to broaden trade.

The analysis shows that, except for abundant copper reserves, Chile’s economic profile, surprisingly, resembles Malaysia’s. The Asian nation has similarly strong education and institutions, but it benefits from being much closer to the major global supply-chain hubs of China, Japan and Korea.

Prominent Asian and European exporters, from Hong Kong and Singapore to Ireland and Denmark, have among the most diverse and complex shipments and the strongest horizontal policies.

For governments aspiring to more varied trade flows, the new approach to explaining diversification underscores the need to effectively shorten geographic distance by enhancing connectivity between nations. Better transportation logistics, at seaports for example, effectively shorten distance by reducing transit times for goods. Other helpful policies include easing trade policy barriers, enhancing trade facilitation, fostering the spread of technology through educational exchange programs, and investing in communication technologies such as broadband that support the digital economy.

Strengthening horizontal policies may seem challenging, especially for countries with lower income. However, several countries have much stronger policies than expected for their income levels, including Rwanda for governance; Georgia and Ukraine for educational attainment; Malaysia for infrastructure; and Mauritius and Peru for tariffs. These economies can be role models.

To be sure, that doesn’t deny the potential effectiveness of more targeted support for individual sectors. Industrial policy levers, though, maybe less effective or even harmful. Potential drawbacks include diminished fiscal capacity, a race to the bottom in taxation, and eroded multilateralism. Furthermore, there is no cross-country statistical evidence of their effectiveness.

Instead, diversification strategies built around broader policies and connectivity are both less controversial and more supportive of export diversification and complexity.