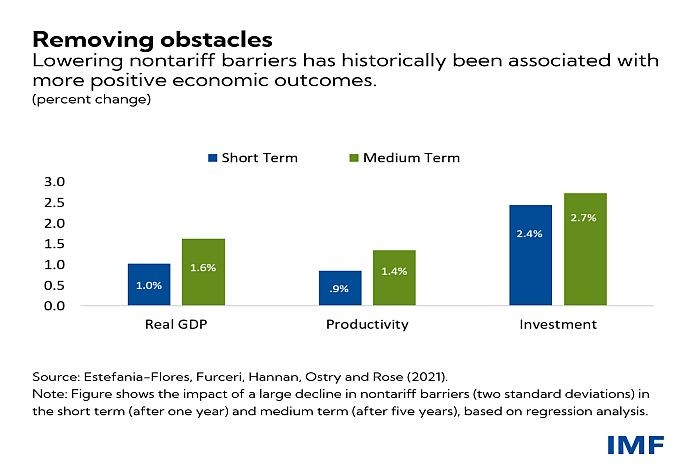 Trade has historically been a powerful driver of economic growth and poverty alleviation in Asia, though the momentum of lowering trade barriers has slowed in recent years.

While tariff barriers to trade in Asia are low overall, a new measure of nontariff barriers suggests those remain high in many Asian emerging markets and developing economies. Unlike tariffs, these barriers include policies that introduce frictions such as licensing requirements or restrictions on trade, payments, or exchanging foreign currencies.

According to recent research, which was detailed in the IMF’s Asia-Pacific Regional Economic Outlook, easing nontariff barriers can boost gross domestic product by about 1.6 percent, potentially healing about a quarter of expected pandemic scarring. The findings take on added significance given that IMF forecasts suggest GDP in 2024 will be 6 percent below the pre-crisis trend in Asian emerging and developing economies, equal to losses of about $1 trillion annually.

For a better understanding, it helps to consider the region’s history of cross-border activity. Strong GDP growth in Asia was accompanied for decades by a steady rise in measures of trade openness, such as the share of goods and services trade in GDP, and greater participation in global value chains. However, this openness has stalled in recent years, suggesting that Asia’s traditional growth engine was slowing even before the pandemic.

This coincided with slower reforms. Average tariffs in Asia fell sharply from more than 50 percent in the 1970s to single digits in the early 2000s, leaving little room to improve. But levies aren’t the whole story. Nontariff barriers have long been viewed as a significant impediment to trade, though concrete analysis has been challenging due to data limitations.

To overcome this constraint, a forthcoming IMF working paper compiles a comprehensive measure of trade restrictions for 159 economies as far back as 1949. This index uses detailed trade-barrier data in the IMF’s Annual Report on Exchange Arrangements and Exchange Restrictions. This captures various obstacles such as licensing requirements or documentation hurdles for releasing foreign currency.

The index shows that, in contrast to the major drop in tariffs over the past half-century, nontariff barriers have declined less and remain relatively elevated. The level for Asia declined from near 20, the highest level, in the 1960s to around 15 by 1995, but has since remained little changed.

These scores tend to be particularly high for low-income countries such as Nepal, Bangladesh, and Myanmar, though large emerging economies such as China and India also have scope for reforms. The average reading among Asia’s emerging market and developing economies also is significantly higher than those for other regions.

Empirical analysis suggests lowering nontariff barriers offers potentially large economic gains. A significant reduction in our measure, along the lines of Sri Lanka’s removal of export licensing, financing, and documentation requirements in the early 1990s, can help boost GDP by about 1 percent in the short-term. Those gains increase to about 1.6 percent after five years.

Notably, improvements come from greater investment and productivity, not directly through higher net exports. This highlights how advances from trade liberalization occur via multiple channels that include benefits from specialization, technology transfer, and the reallocation of resources to more productive firms.

As vaccinations foster the recovery from the pandemic, policymakers must prioritize economic reforms to support growth and minimize scarring from the crisis, especially in emerging and developing economies. These can include policies aimed at reversing the pandemic-induced setback to workforce education and skill levels, as well as reforms to labor and product markets.

Our research illustrates how lowering international trade costs can help:

Reducing services restrictions: There is significant scope to ease restrictions on transactions beyond physical goods in areas such as travel, shipping, and consulting, and on international transfers, as Australia did in the 1980s. Reforms like these will likely offer greater benefit in coming years as services trade grows more rapidly.

While reducing trade barriers can help boost output in the medium term, it can also come with potentially adverse distributional consequences. The reallocation associated with reforms generates winners and losers, with the already better-off often benefitting more. Therefore, it’s essential to accompany trade reforms with policies to mitigate impacts on inequality, including financial support for the hardest hit and retraining programs to help workers find new jobs.

As economies confront years of lingering effects from the pandemic, a renewed embrace of trade openness is a promising avenue to explore. Healing the pandemic’s scars is a priority, and our research shows that reducing trade barriers can reignite Asia’s growth engine.