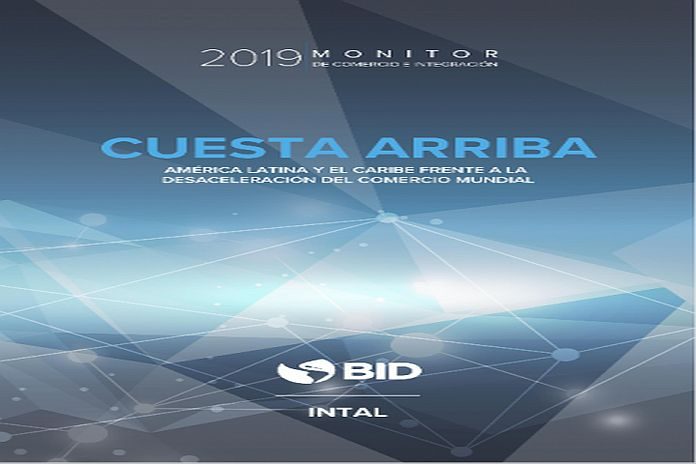 WASHINGTON, USA — Against the backdrop of a global economic slowdown, Latin America and the Caribbean should increase non-traditional exports, particularly services with a high-added value, according to a new report from the Inter-American Development Bank.

The annual study Trade and Integration Monitor, which analyzes trade flow trends in the region, reports that the value of exports from Latin America and the Caribbean fell 1.3 percent in the first half of 2019, compared with the same period in 2018, confirming the end of the expansion phase of just over two years.

The value of exports of goods from the region had grown on average 8.8 percent in 2018, according to the report.

“The synchronized slowdown of advanced and emerging economies and the contraction of the terms of trade in the region indicate that Latin America needs an insurance policy to protect itself from external risks,” said Paolo Giordano, principal economist at the IDB’s Integration and Trade Sector, who coordinated the report.

“It will not be possible to reactivate trade expansion without putting the challenges of competitiveness in international markets at the center of the development agendas of the countries of the region,” he added.

The change in trend was mainly driven by the drop in prices and a slowdown of export volumes, in a context of widespread weakness in commodity markets.

Only the Pacific Alliance, made up of Mexico, Colombia, Chile, and Peru, registered a slight increase in external sales, mainly driven by extra-regional exports from Mexico. In the rest of the integration blocks, the contraction of total exports was the result of both the fall in intraregional shipments and sales to the rest of the world. In MERCOSUR, the decline in sales among its members – Brazil, Argentina, Uruguay, and Paraguay – contributed decisively to the contraction of total exports.

The 8.4 percent fall of intraregional shipments in the first half of 2019 impacted the weak trade performance of the region in that period, consolidating a medium-term trend marked by the reduction in the intensity of intraregional trade. This contrasts with exchanges within the region in 2018, which increased 6.9 percent.

Despite some notable progress in exports of services, the region still shows a profile characterized by a lack of diversification and some competitiveness failures. In the first half of 2019, exports of services registered a slight growth of 0.4 percent, compared with 2.4 percent for that same period in 2018.

In 2018, the contribution of exports of services from the region to total shipments (13.7 percent) was below the world average (23.2 percent) and was concentrated in traditional sectors, such as travel and transportation. However, knowledge-intensive services exports are rapidly gaining ground, especially in business and information technology services.

A medium-term analysis of the competitive profile of exports of services in the region reveals that, between 2012 and 2017, only five percent of the value of external sales came from strategic segments, such as information technologies, where the region was able to gain market share and global demand grew more than the average.

Reforms and investment to boost the development of strategic sectors, as well as better data to measure cross-border transactions, are essential for the region to improve its positioning and performance in global services markets, particularly in a scenario of stagnation of trade in goods such as the current one.

Looking ahead, and given the global context of economic slowdown, the report also highlights the importance of advancing in deepening regional integration.