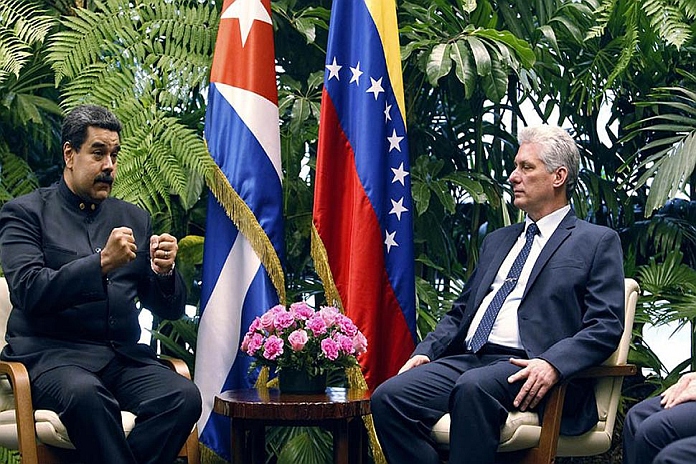 The world has gone amok. In fact, the world has been amok for decades, but COVID-19 has laid bare for all to see the pretenses, political fairytales, socio-economic and geopolitical travesties and bloodletting of the uber-powerful. It also provides the ideological pretext for massively expanding ongoing pandemics, particularly the exacerbation of long-enduring scourges; the poverty pandemic, the decomposition of the State and regime change mania. They have caused and will generate exponentially more suffering and death than COVID-19. Be that as it may, COVID-19 exploits and exposes the debilitating effects on our health infrastructure, economic and social systems of these other longstanding, billionaire-engineered pandemics.

The assault on the public policy and services apparatus is man-made and deliberate, including the weakening of its capacity to fight COVID-19. This pandemonium is occurring, not only overseas but right in our own inner-cities, the First Nations, our rural communities, our suburbs, and our long-term care homes. COVID-19 one positive attribute is that it shines a billion bright candles on the hollowing-out, for the benefit of the very few, of our collective health and other life-essential institutions.

Iron Maiden Margaret Thatcher and Ronald Reagan, at the bidding of the uber-rich and powerful, launched the neo-liberal agenda of dismantling the social and economic fabrics of continents. The Bushes, Clintons, Tony Blair, Stephen Harper, and Barack Obama and their billionaire sponsors accelerated this process and compounded it through endless wars, mind-bending color revolutions, and illegal regime change operations. Rust Maiden Chrystia Freeland, Canada’s de-facto prime minister of foreign policy, made this ideological war her own and took it to dizzying heights.

Why Rust-Maiden-Freeland, one might ask? Because everything she meddles with turns to rust and dust. And she meddles a lot, at home and abroad. Let us count the ways.

Freeland blocks a team of Cuban doctors from coming to Manitoba First Nations to provide emergency medical assistance. This, despite the fact that First Nations communities are drastically underserved, left with no defenses against the virus. According to a Manitoba chief, “Canada does not have enough health care workers to mitigate the spread of COVID-19 and to address the numbers of upcoming cases in First Nation communities”. Freeland’s excuse for her blockage: “Canada’s health care system, which is staffed by outstanding health care professionals has the capacity to deal with this extraordinary challenge”.

First Nations know Freeland’s statements to be patently misleading; the health system is already unable to care for the general population and COVID-19 may become an acute humanitarian issue for their peoples, given that their life expectancy and other social indicators are already much worse than Canada’s average. Member of parliament Niki Ashton takes Freeland to the task. “First Nations are not getting the support they need,” she says. “Some communities are having their doctors pulled. Many can’t do the testing. Others need field hospitals urgently. There’s no time to wait.” Prime Minister’s Trudeau’s National Reconciliation, as delivered by Freeland, goes beyond willful neglect.

Cuba’s Interferon Alpha 2B is a proven drug to treat COVID-19. It is a key contributor to China’s coronavirus success story and is used to positive effect in Italy and many other countries around the world. Yet Canada still claims that there is no cure for COVID-19. Why is prime minister Justin Trudeau, Freeland, and the Canadian/American pharmaceutical industry, with the help of the necrolytic mainstream media echo-chamber, pontificating that there is no cure, all the while rejecting Interferon Alpha 2B. 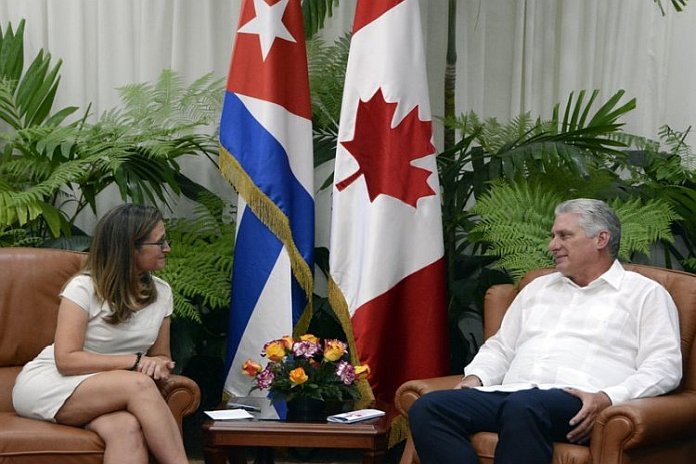 Because Big Pharma wants the exclusivity of COVID-19 vaccines with decades-long patents even if it will take them 12 to 18 months to develop them. Why deprive Canadians of the Interferon Alpha 2B life-saving treatment, given that Canada could quickly draw up a joint agreement? Why is the Trudeau – Freeland tandem so Cuba-averse all of a sudden? Another vital relationship is rusting, if not biting the dust, on the altar of USA sanctions.

Neither Rust Maiden Freeland nor prime minister Trudeau is calling out the White House cabal for blocking vital coronavirus equipment from getting into Cuba? Why are they embarrassing all Canadians by being silent and complicit in the US siege against Cuba, blocking food and the entry of all manner of other life-essential products from entering or leaving Cuba? Ever since Trudeau was cowed into reversing himself after praising Fidel Castro when he died, our prime minister has been at the beck and call of Washington. That day, Canada’s foreign policy, as fashioned by Pierre Trudeau among others, died.

Chrystia Freeland, under the orders of the captains of industry, mining, and finance, has been the conductor-in-chief of the Lima Group Orchestra and the Guaidó Folly; Guaidó was unceremoniously dumped two days ago by Mike Pompeo. While Trump is going apoplectic about COVID-19 and desperately trying to divert attention by threatening fire and brimstone against Venezuela with warships, fighter jets, and death-spewing drones, Rust Maiden Freeland is cheering him on and working hard at tightening the noose around the necks of all Venezuelans; further compounded by her supporting the International Monetary Fund (IMF) refusal to lone Venezuela the crucial funds it needs to defend against COVID-19. Her actions and Trudeau’s acquiescence ensure that the Venezuelans’ “to dust thou shalt return” occurs prematurely.

Trudeau and Freeland have boosted the oppression of Palestinians via absolute support for the Israeli Zionist apartheid regime and the silencing of the human rights opposition, in Canada and abroad, including supporting the heinous blocking of life-saving COVID-19 equipment into Gaza.

Freeland conceals Saudi Arabia’s murdering of tens of thousands of Yemenis (over 100,000 war dead, plus 85,000 children dead from malnutrition, with another 14 million Yemenis on the brink of famine, according to the UN). These horrifying numbers don’t even take into account the deadly havoc that COVID-19 will visit on these greatly weakened populations. Freeland also feeds the ignominious crime-against-humanity dictatorship that is Saudi Arabia by supplying Export Development Canada resources (our taxes at work) and approving killing-machine contracts. This is the regime that, let’s not forget, is also one of the architects of the present drastic collapse of oil prices that is crippling Alberta’s economy. When will premier Jason Kenny call out Freeland and Trudeau on this? He won’t of course because Saudi Arabia is made of the same cloth.

Rust Maiden Freeland chooses ideology over economic sanity and urgently needed medical treatment capacity, precisely at the time when COVID-19 is at its worst. Her actions internationally and domestically are undermining some of the laudable efforts that her own government is making to fight COVID-19. Prime Minister Trudeau has a decision to make.

Pierre LeBlanc is a Canadian policy analyst and activist. He has worked on a host of human justice and equality issues both domestic and international. Over 45 years, he has analysed, written and intervened on the policies and actions of the Canadian government.

Pierre LeBlanc was an official international observer in Caracas for the May 20, 2018, Venezuelan presidential election. While at UNESCO in Paris and Palestine and Israel, he developed a Tier II Peace Dialogue Initiative with the Palestinian and Israeli civil societies. He has also worked on conflict prevention initiatives in Macedonia and Lebanon. LeBlanc is a national authority on Canada’s official language policies and has worked extensively on the development of societal infrastructure.

New representative of Peru to the OAS presents credentials