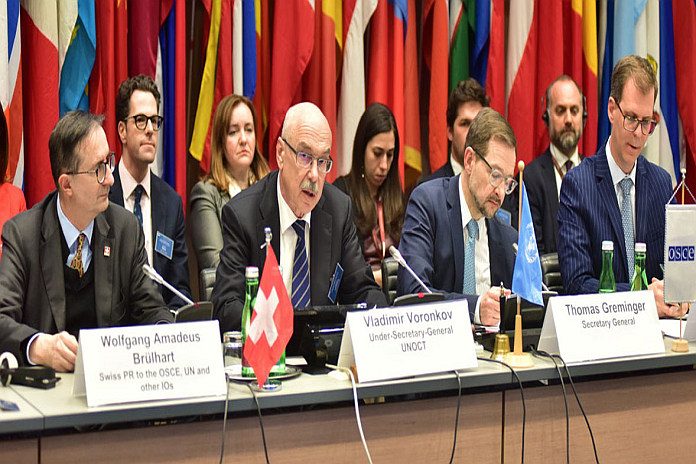 GENEVA, Switzerland – Over the past few years, ISIL and Al-Qaida terrorist fighters have posed an “unprecedented threat to international peace and security”, the UN counter-terrorism chief said on Wednesday in Vienna, at the close of a joint UN- Organization for Security and Co-operation in Europe (OSCE) regional conference on addressing challenges posed by terrorists who have gone to fight overseas.

Undersecretary-general of the UN Office of Counter-Terrorism, Vladimir Voronkov, recalled that last week he presented to the Security Council the secretary-general’s report on the continuing threat posed by ISIL.

“ISIL is resurgent as a covert network in Iraq and Syria”, he said. “Thousands of foreign terrorist fighters remain at large, posing a threat to Iraq, Syria, and the countries they might return or relocate to”.

Voronkov stressed that all sessions of the conference underlined the need to further strengthen international, regional and bilateral counter-terrorism cooperation – with many participants highlighting the centrality of the UN Global Counter-Terrorism Strategy.

He highlighted that the Joint Plan of Action (JPOA) for implementing the Strategy in Central Asia “could serve as a model for collaboration in other regions”.

“We are also working closely with the Arab interior ministers council to strengthen Arab countries’ measures to effectively counter-terrorism”, using JPOA as a model, he said. According to the Counter-Terrorism chief, participants stressed the urgent need for gender and age-sensitive programmes to assist children linked with terrorist groups.

As thousands of children remain trapped in Syria and Iraq, facing a multitude of challenges, including rejection and life-long stigmatization, Voronkov stressed that Member States have “the primary responsibility to address the plight of their nationals, including children trapped in conflict zones”.

“Children should always be seen as victims and efforts to address their plight should be based on the best interest of the child”, he spelled out.

The need to prevent, detect and disrupt the travel of foreign terrorist fighters, in accordance with international law, was front and centre during discussions as well, drawing attention to the importance of enhancing Member States’ capacities to do so.

“Both the OSCE and the UN are helping countries adopt and use Advance Passenger Information and Passenger Name Record data systems”, he informed those gathered, calling the UN Countering Terrorist Travel Programme “a flagship demonstration” of how the UN system, together with international policing organization INTERPOL and others, are “working as one” to provide tailored, impactful assistance to Member States.

Noting that “the phenomenon of foreign terrorist fighters is one of the most serious dimensions of the terrorist threat”, Voronkov concluded by urging Member States to continue working together, through the UN and other platforms, “not only to protect people on their own territory but extend solidarity and assistance beyond their borders”.

Swoop announced as start-up airline of the year