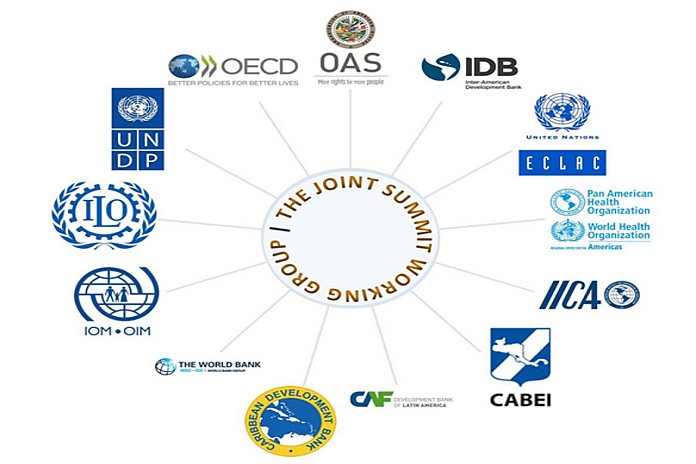 WASHINGTON, USA – In response to the emergency caused by COVID-19, the high authorities of the Joint Summit Working Group (JSWG) met this week for the second time to ratify their commitment in support of the member states of the Americas and multilateralism as an instrument to address multiple challenges facing the region in the post-COVID-19 phase.

With this in mind, the general secretariat of the Organization of American States (OAS) raised the need to work on a thematic agenda that incorporates the specific demands of regional organizations such as SICA (Central American Integration System) and CARICOM (Caribbean Community).

In a previous session, the OAS general secretariat had already expressed the need to consider the issues raised by the president of Costa Rica, Carlos Alvarado, and the prime minister of Barbados, Mia Mottley, representing CARICOM:

Along the same lines, when opening the meeting on April 29, the OAS secretary general, Luis Almagro, emphasized addressing the problem of food security.

The meeting, jointly organized by secretary-general Almagro and the director of the Pan American Health Organization (PAHO), Carissa Etienne, reiterated the importance of concerted action among international cooperation agencies to address the multiple impacts that the countries of the region will have to face.

Regarding the emergency response, PAHO mentioned being in the process of becoming part of the “Global Supply Chain Task Force,” which will allow it to access supplies and logistics using the PAHO Strategic Fund, a technical cooperation mechanism for pooled procurement of essential medicines and strategic health supplies.

To date, 33 member states in the Americas have signed agreements to use the Strategic Fund and 12 countries are using the fund to access supplies related to COVID-19.

In the fiscal front, the United Nations Economic Commission for Latin America and the Caribbean (ECLAC), the World Bank and the Inter-American Development Bank (IDB) agreed that an economic contraction is expected this year. Regarding the requests of debt moratoriums, they alerted about its impact on the credit rating that could impact the availability of resources for the region.

At the institutional level, for the United Nations Development Program (UNDP), this crisis is an opportunity to strengthen governance and credibility in governments, avoiding weakening democratic controls and expanding social participation in decision-making.

The Organization for Economic Cooperation and Development (OECD) warned of the risk of food security due to the fall in food production and stressed the need to implement a collective strategy of the JSWG, taking advantage of the respective capacities of each member institution.

Initiatives of multilateral and regional entities:

It is expected that this cooperation mechanism will allow for strengthened action in the face of the multiple challenges that governments of the region and the population of the Americas will have to address.

The Joint Summit Working Group is made up of: