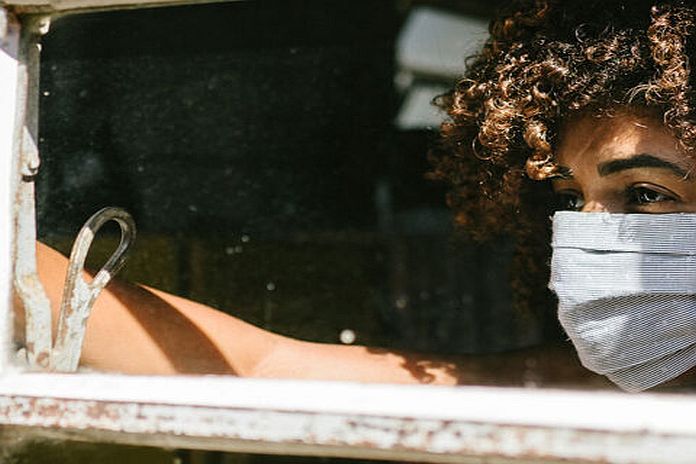 It is one year into the COVID-19 pandemic and the global community still confronts extreme social and economic strain as the human toll rises and millions remain unemployed. Yet, even with high uncertainty about the path of the pandemic, a way out of this health and economic crisis is increasingly visible. Thanks to the ingenuity of the scientific community hundreds of millions of people are being vaccinated and this is expected to power recoveries in many countries later this year. Economies also continue to adapt to new ways of working despite reduced mobility, leading to a stronger than anticipated rebound across regions. Additional fiscal support in large economies, particularly the United States, has further improved the outlook.

The upgrades in global growth for 2021 and 2022 are mainly due to upgrades for advanced economies, particularly to a sizeable upgrade for the United States (1.3 percentage points) that is expected to grow at 6.4 percent this year. This makes the United States the only large economy projected to surpass the level of GDP it was forecast to have in 2022 in the absence of this pandemic. Other advanced economies, including the euro area, will also rebound this year but at a slower pace. Among emerging markets and developing economies, China is projected to grow this year at 8.4 percent.

While China’s economy had already returned to pre-pandemic GDP in 2020, many other countries are not expected to do so until 2023. Nonetheless, the future presents daunting challenges. The pandemic is yet to be defeated and virus cases are accelerating in many countries. Recoveries are also diverging dangerously across and within countries, as economies with slower vaccine rollout, more limited policy support, and more reliant on tourism do less well.

These divergent recovery paths are likely to create wider gaps in living standards across countries compared to pre-pandemic expectations. The average annual loss in per capita GDP over 2020-24, relative to pre-pandemic forecasts, is projected to be 5.7 percent in low-income countries and 4.7 percent in emerging markets, while in advanced economies the losses are expected to be smaller at 2.3 percent. Such losses are reversing gains in poverty reduction, with an additional 95 million people expected to have entered the ranks of the extreme poor in 2020 compared with pre-pandemic projections.

Swift policy action worldwide, including $16 trillion in fiscal support, prevented far worse outcomes. Our estimates suggest last year’s severe collapse could have been three times worse had it not been for such support.Uneven recoveries are also occurring within countries as young and lower-skilled workers remain more heavily affected. Women have also suffered more, especially in emerging market and developing economies. Because the crisis has accelerated the transformative forces of digitalization and automation, many of the jobs lost are unlikely to return, requiring worker reallocation across sectors—which often comes with severe earnings penalties.

Working together to give people a fair shot

A high degree of uncertainty surrounds our projections. Faster progress with vaccinations can uplift the forecast, while a more prolonged pandemic with virus variants that evade vaccines can lead to a sharp downgrade. Multi-speed recoveries could pose financial risks if interest rates in the United States rise further in unexpected ways. This could cause inflated asset valuations to unwind in a disorderly manner, financial conditions to tighten sharply, and recovery prospects to deteriorate, especially for some highly leveraged emerging markets and developing economies.

Policymakers will need to continue supporting their economies while dealing with more limited policy space and higher debt levels than prior to the pandemic. This requires better-targeted measures to leave space for prolonged support if needed. With multi-speed recoveries, a tailored approach is necessary, with policies well-calibrated to the stage of the pandemic, the strength of the economic recovery, and the structural characteristics of individual countries.

Right now, the emphasis should be on escaping the health crisis by prioritizing health care spending on vaccinations, treatments, and health care infrastructure. Fiscal support should be well targeted to affected households and firms. Monetary policy should remain accommodative (where inflation is well behaved), while pro-actively addressing financial stability risks using macroprudential tools.

As the pandemic is beaten back and labor market conditions normalize, support such as worker retention measures should be gradually scaled back. At that point, more emphasis should be placed on reallocating workers, including through targeted hiring subsidies, and reskilling of workers. As exceptional measures such as moratoria on loan payments are withdrawn, firm insolvencies could rise sharply and put one in ten jobs at risk in many countries. To limit long-term damage countries should consider converting previous liquidity support (loans) into equity-like support for viable firms, while developing out-of-court restructuring frameworks to expedite eventual bankruptcies. Resources should also be devoted to helping children catch-up on lost instructional time during the pandemic.

Once the health crisis is over, policy efforts can focus more on building resilient, inclusive, and greener economies, both to bolster the recovery and to raise potential output. The priorities should include green infrastructure investment to help mitigate climate change, digital infrastructure investment to boost productive capacity and strengthening social assistance to arrest rising inequality. 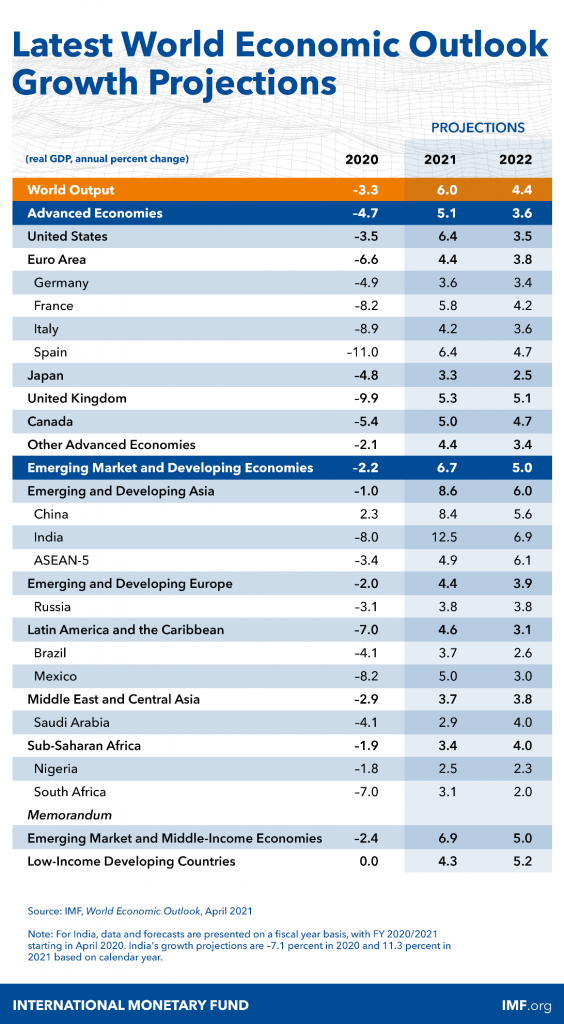 Financing these endeavors will be more difficult for economies with limited fiscal space. In such cases, improving tax capacity, increasing tax progressivity (on incomes, property and inheritance taxation), deploying carbon pricing, and eliminating wasteful expenditures will be essential. All countries should anchor policies in credible medium-term frameworks and adhere to the highest standards of debt transparency to help contain borrowing costs and eventually reduce debt and rebuild buffers for the future.

Policymakers should also continue to ensure adequate access to international liquidity. Major central banks should provide clear guidance on future actions with ample time to prepare, to avoid taper-tantrum kinds of episodes as occurred in 2013. Low-income countries will benefit from further extending the pause on debt repayments under the Debt Service Suspension Initiative and operationalizing the G20 Common Framework for orderly debt restructuring. A new allocation of the IMF’s Special Drawing Rights will provide needed liquidity protection in highly uncertain times.

Even while all eyes are on the pandemic, it is essential that progress is made on resolving trade and technology tensions. Countries should also cooperate on climate change mitigation, on modernizing international corporate taxation, and on measures to limit cross-border profit shifting, tax avoidance, and evasion.

Over the past year, we have seen significant innovations in economic policy and massively scaled-up support at the national level, particularly among advanced economies that have been able to afford these initiatives. A similarly ambitious effort is now needed at the multilateral level to secure the recovery and build forward better. Without additional efforts to give all people a fair shot, cross-country gaps in living standards could widen significantly and decades-long progress in global poverty reduction could reverse.

Taiwan is a powerhouse of economic and political gains