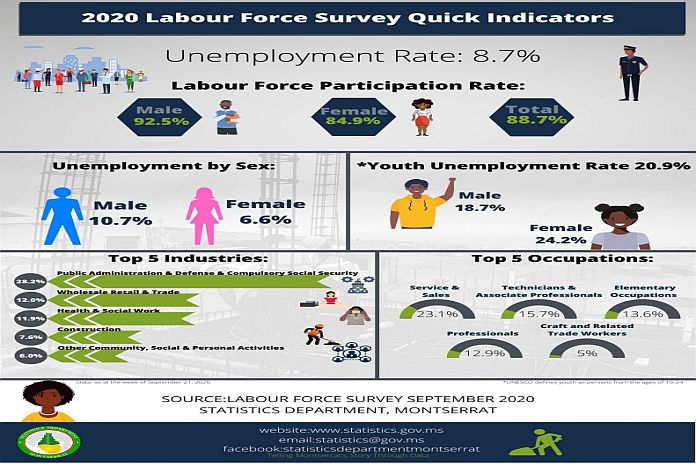 BRADES, Montserrat — The Statistics Department of Montserrat (SDM) within the Ministry of Finance and Economic Management (MoFEM) has released key indicators from the recently conducted Labour Force Survey (LFS) as at September 2020, in the form of an infographic.

The infographic provides condensed information on the following areas:

As at September 2020, Montserrat’s Labour Force stood at 2,727 persons, of these 1,406 males and 1,321 females. The Labour Force comprises of persons 15 years and older who are employed (had a job and worked, had a job but did not work) and unemployed (looked for work or wanting work and was available) during the reference period of the survey during the week of September 20, 2020. The Labour Force Participation rate was 88.7 – 92.5 percent males and 84.9 percent females showing that more men participated in the Labour Force in comparison to their female counterparts, a difference of four percentage points.

The infographic also provides details on the top five occupations and industries on Montserrat.

As it relates to the methodology, the 2020 Labour Force Survey was administered via telephone interviews; an alternate mode of data collection as a result of the COVID-19 pandemic.

A sampled population of 850 households across Montserrat were selected by a systematic random sampling technique. Data was populated on 731 households that is, 86 percent of the targeted number of households participated in this survey. This was the first Labour Force Survey held in Montserrat.

In 2018, a Labour Force Census was conducted and labour force indicators were compiled from previous decennial Population and Housing Censuses.

Information retrieved from Labour Force exercises provide timely Labour Force data that can be used in informed planning and decision-making in assessing a nation’s socio-economic standing. A more detailed key findings report of the 2020 Labour Force Survey will be made available to the public by the first week of June 2021. The SDM invites all users of statistics to make use of this infographic publication and any other publications.

Additionally, the SDM is conducting a Labour Day 2021 quiz starting today (Monday, May 3, 2021- Labour Day).  The quiz, infographic and other information from the SDM is available on the department’s website.