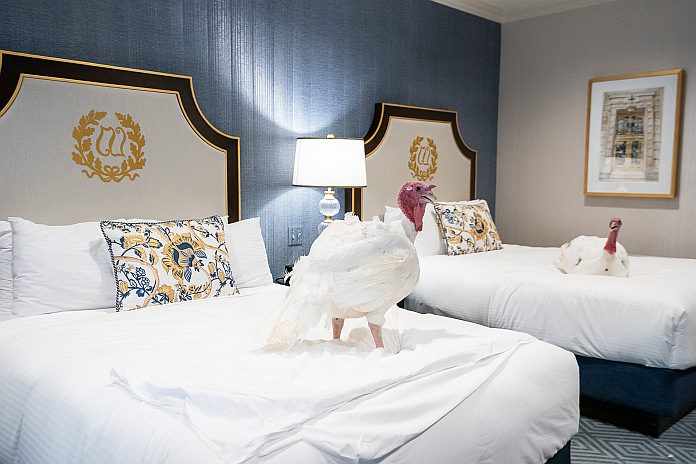 “Butter” and his alternate, “Bread,” received a formal pardon from the president and will now reside at Gobblers Rest on the campus of Virginia Tech in Blacksburg, Virginia. The National Thanksgiving Turkey Presentation is a time-honored American tradition, which started in 1947.

“As we gather this week with loved ones across our land, we give thanks to God for the many gifts he has bestowed upon us,” said president Trump during the presentation. “Today, we also come together to honor our beautiful feathered friend, the noble turkey… This Thanksgiving, we bow our heads in gratitude for the new-found prosperity and spirit that’s taking place all across America.”

“As Americans prepare to gather to give thanks, it is an honor to be invited to present the National Thanksgiving Turkey to the president and First Lady,” said NTF Chairman Kerry Doughty. “Being here with my family [today] and participating in this special tradition is one of the highlights of my career in the turkey industry and a reminder of all that we have to be grateful for, including those who are working day in and day out to bring food to our tables.”

Doughty is the 2019 chairman of the National Turkey Federation and the former president and chief executive officer (CEO) of Butterball, LLC. He has spent more than 35 years in the turkey industry. Doughty resides in Apex, North Carolina, with his wife, Jan. Their children and grandchildren attended the National Thanksgiving Turkey Presentation.

The annual presentation of the National Thanksgiving Turkey at the White House has become a highly anticipated tradition in the nation’s capital, signaling the unofficial beginning of the holiday season and providing the president and the nation an opportunity to reflect publicly on the meaning of Thanksgiving. The presentation also highlights the contributions of America’s turkey growers as well as the important role of agriculture in modern America.

The National Thanksgiving Turkey and alternate were raised under the supervision of Doughty by Butterball contract grower Wellie Jackson of North Carolina. North Carolina is the second-largest turkey-producing state in the United States.

While in Washington, D.C the turkeys stayed at the historic Willard InterContinental, adjacent to the White House grounds. The permanent home for “Butter” and “Bread” will be at Gobblers Rest on the campus of Virginia Tech in a custom-built enclosure inside the Animal and Poultry Science Department’s Livestock Pavilion. The turkeys will be available for the public to visit and learn about the university’s programs in animal and poultry sciences and veterinary medicine.

Jaindl’s Turkey Farm of Orefield, Pennsylvania, provided the president’s family with two dressed turkeys as part of the First Family’s food donation to a local charity.

The mis-education of a nation: Sad, dark and dangerous times in...