WASHINGTON, USA – The new Permanent Representative of Costa Rica to the Organization of American States (OAS), Alejandra Solano, presented her credentials today to the secretary-general of the OAS, Luis Almagro, in a virtual ceremony.

During the ceremony, ambassador Solano said her country and the OAS share many values and principles. “The objectives established in the OAS Charter are aligned with the principles of Costa Rica’s foreign policy: peace, legality, democracy, fundamental freedoms, human rights, disarmament, sustainable development and preservation of the environment,” said the Costa Rican diplomat.

Secretary-General Almagro highlighted the strength of Costa Rica’s democratic institutions and its defense of the fundamental principles of the Inter-American system. “At the OAS we work with the four basic pillars of the Organization: promotion and defense of democracy, human rights, hemispheric security, and integral development. Costa Rica honors these basic principles with its presence and with its actions,” added the OAS secretary-general.

Ambassador Solano is a lawyer by profession and has had an extensive career in the ministry of foreign affairs and the Worship of her country. 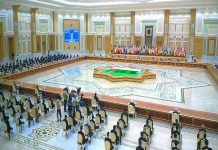 US contributes to OAS cybercrime program