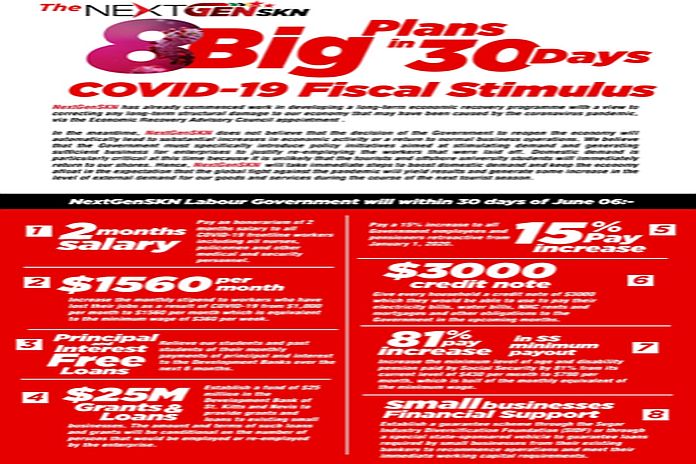 BASSETERRE, St Kitts – The St Kitts and Nevis Labour Party (SKNLP) has announced a series of fiscal incentives that will benefit frontline workers, civil servants, pensioners, students, and small business persons within the first 30 days of a return to governance, following the June 5 general elections.

Former prime minister Dr Denzil Douglas made the major announcement during a virtual public meeting in keeping with COVID-19 regulations.

He said the new NextGen SKN labour government will within 21 days of taking office pay an honorarium of two months salary to all COVID-19 frontline workers including nurses, doctors, medical staff, policemen, soldiers, and security personnel.

The former minister of finance, Dr Douglas said all civil servants, government employees, and pensioners will be paid a 15 percent increase retroactive from January 1, 2020.

“We will also increase the monthly stipend to workers who have lost their jobs as a result of COVID-19 from $1,000 per month to $1,560 per month which is equivalent to the minimum wage of $360 per week and we will also give every household a credit note of $3,000 which they would be able to use to pay their electricity bills, water bills, NHC rents, and mortgages and other obligations to the government in the upcoming months,” said Dr Douglas. 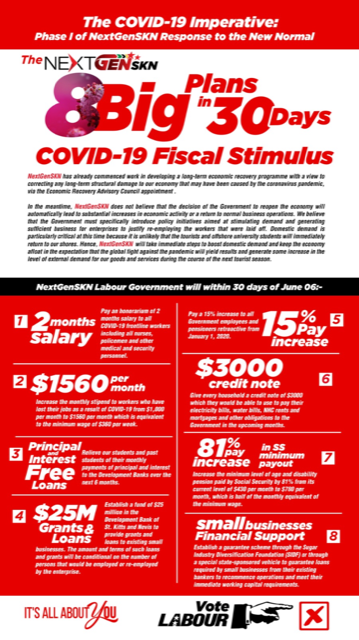 Past and present students will be forgiven the principal and interest on the student loans for the next six months with the Development Bank of St Kitts and Nevis.

“This will not be a moratorium but forgiveness of the principal and interest payable over those six months,” Dr Douglas explained.

Also announced was an increase in the minimum level of age and disability pension paid by Social Security by 81 percent from its current level of $430 per month to $780 per month, which is half of the monthly equivalent of the minimum wage.

The new NextGen SKN labour government plans to establish a fund of $25 million in the Development Bank of St Kitts and Nevis to provide grants and loans to existing small businesses.

“The amount and terms of such loans and grants will be conditional of the number of persons that would be employed or re-employed by the enterprise,” said Dr Douglas, who further disclosed that a guarantee scheme will be established through the Sugar Industry Diversification Foundation (SIDF) or via a special state-sponsored vehicle to guarantee loans required by small businesses from their existing bankers to recommence operations and meet their immediate working capital requirements.

Dr Douglas who has been hailed by international, regional and local financial institutions for chalking up six percent GDP in economic growth in 2013 and 2014 following the international economic and financial recession said: “The St Kitts and Nevis labour party must devise several fiscal and economic solutions that would bring relief to the financial burdens of the workers, pensioners, students and small businesses which have been egregiously affected by coronavirus COVID-19 pandemic”.

He also disclosed that the NextGen SKN has already commenced work in developing a long-term economic recovery programme to correct any long-term structural damage to the St Kitts and Nevis economy triggered by the coronavirus pandemic. Other efforts include expanding local production and income-generating capability, enhancing food security, and building the resilience to similar economic shocks in the future.