“I am deeply disturbed that the hope, prosperity and opportunity that lay in wait under a NextGen SKN labour party has been hijacked in large measure by the many irregularities and anomalies that took place in our electoral and voting processes in the years, months, weeks and days leading to the general election. It is for these reasons that I cannot in good conscience concede the election as being free, fair and free from fear,” said Dr Douglas in his midday address to the nation.

He told the nation that along with the prejudicial environment that sought to give the competitors an unfair advantage, the Unity administration committed many irregularities which limited the rights of citizens in the voting process.

“There have been serious, significant irregularities in the process which we believe have affected the results. We are collating the reports from the various polling agents of the Party and will report in short order. In the meantime keep your chins up, your heads high and rally with your NextGen SKN team,” Dr Douglas, whose SKNLP won two of the eight seats it contested on St Kitts.

He said that the will of the people is the only source of authority of government and no right-thinking person can objectively declare that Election 2020 was run based on the standards, principles and ethics of good governance.

“For these reasons, the St Kitts-Nevis Labour Party cannot accept the election results. We are in the process of examining and compiling evidence to take serious action on these matters in the future. I, therefore, reserve my congratulations until these matters have been duly resolved,” said Dr Douglas.

“I wish to say to my beloved people of our Federation that the next five years will not be easy as St Kitts and Nevis, one of the smallest countries in the world by population, struggles to find its new footing in the present post-COVID-19 global environment. However, I remain confident that the invincible spirit, intelligence, resourcefulness and resilience of our people will take us through even this, our darkest hour, to brighter days,” said Douglas, a former prime minister. 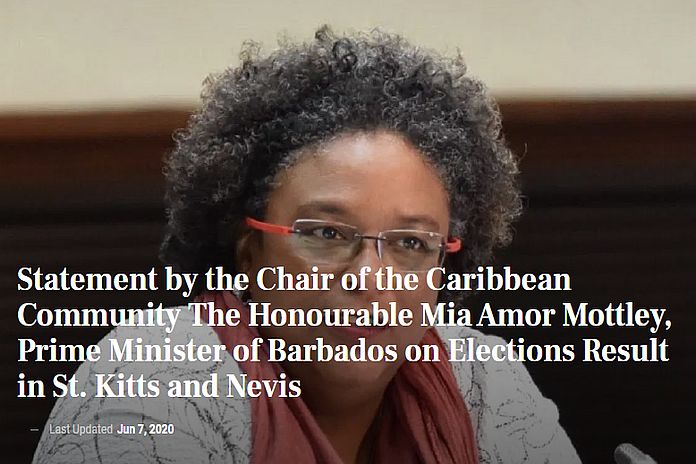 “The Caribbean Community (CARICOM) congratulates the Dr Timothy Harris, prime minister of the Federation of St Kitts and Nevis and his Team Unity on the resounding victory in the general elections on 5 June 2020.

“The overwhelming nature of the triumph at the polls indicates the scale of confidence that the people of the Federation of St Kitts and Nevis have in the ability of the party to guide them to a secure and prosperous future.

“The Community also congratulates the people of the Federation of St Kitts and Nevis on the smooth and peaceful conduct of the poll in spite of the challenges posed by the COVID-19 Pandemic.”

“The CARICOM Election Observation Mission, at the invitation of Dr. the Honourable Timothy Harris, Prime Minister of the Federation of St. Kitts and Nevis, observed the General Elections held on 5 June 2020.  Constituted at short notice, the small team of three observers arrived two days before the elections.  The team members were tested on arrival for COVID-19 and protective measures taken.

On the day prior to the elections the mission met with a cross-section of stakeholders including the Supervisor of Elections, the Commissioner of Police, representatives of political parties and members of civil society and non-governmental organisations.

On polling day, the team visited ninety-four (94) polling stations across ten (10) of the eleven (11) constituencies: seven (7) in St. Kitts and three (3) in Nevis. The Mission monitored the day’s activities by observing the opening of the poll, the voting process, the closing of the poll and the counting of ballots.

No major concerns were observed.

Adequate security was in place at all locations with the Officers displaying a very professional approach which contributed to the level of calm which accompanied the day’s activities.  The turnout was heavy in the morning with a lull by midday and a steady flow of voters later in the afternoon. The poll workers remained diligent and steadily carried out the required procedures ensuring that all electors who turned out were able to register their vote.

The Mission observed that adequate health measures to protect voters against the COVID-19 pandemic were enforced at all the stations visited.  All polling stations were equipped with additional face masks.

The Mission’s assessment of the Election Day activities is that the voters were able to cast their ballots without intimidation or fear and that the results of the 5 June 2020 General Elections reflect the will of the people of the Federation of St. Kitts and Nevis.  The preliminary results indicate that Team Unity has won nine (9) of the eleven (11) seats.

The Mission congratulates the staff of the Electoral Office, the poll workers, the political parties and all candidates, the security forces and the people of St. Kitts and Nevis for the mature way in which the Elections were conducted and the high level of discipline displayed throughout the process.

The Mission will prepare a full report for submission to the Secretary-General of the Caribbean Community (CARICOM), His Excellency Irwin LaRocque, which will include among others a recommendation on the need for the Presiding Officers to undertake the preliminary count at the polling stations at the close of the poll and to prepare a statement of the poll thereafter in an effort to reduce the length of time it takes to declare the results so that this can be done within a reasonable amount of time.

“The CARICOM Election Observation Mission wishes to thank all of the stakeholders, including the Leaders of the Political Parties, Civil Society, the Media and the People of the Federation of St. Kitts and Nevis for their warm welcome and cooperation which contributed to the success of the Mission,” ~ Gasper Jn Baptiste – Chief of Mission – CARICOM Election Observation Mission, June 7, 2020.

Why ‘young’ boys should not be told to ‘man up’