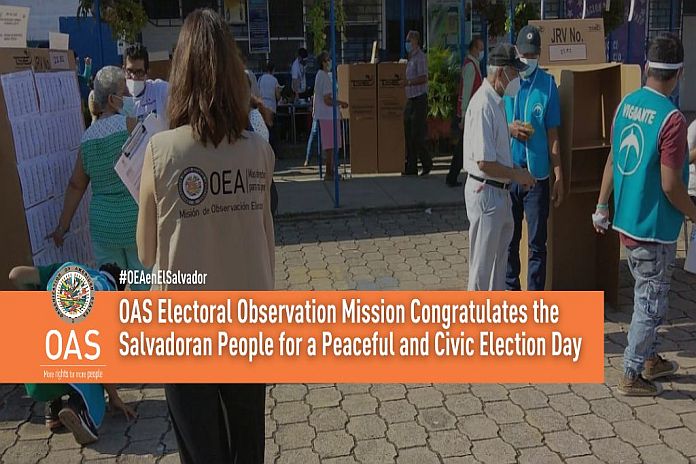 WASHINGTON, USA – The Electoral Observation Mission (EOM) of the Organization of American States (OAS) in El Salvador, headed by the former governor of the province of Buenos Aires María Eugenia Vidal, extended congratulation to the Salvadoran people who, “with patience and democratic conviction, went to the polls on February 28 to express their will clearly and forcefully.”

The Mission highlighted the high citizen participation and that, “despite the context of the pandemic, exceeded that seen in previous similar processes and, in particular, recognizes those who made up the polling station staff and others who helped to carry out a peaceful and civic election day,” the OAS-EOM said in a press release Monday.

“This electoral process took place in the midst of a context of great polarization and confrontation between the main political and institutional figures in the country, in which there were attacks and indications of mistrust in the electoral authority. These indications were mainly focused on the implementation and effectiveness of the computer system to carry out the preliminary vote count and the transmission of results, which functioned acceptably despite its multiple components. Other allegations focused on the inequality of resources for the contest, aggravated by the failure to deliver the advance payment of the political debt that by law the political parties should have received for the electoral campaign.”

The OAS-EOM release continued: “In the days before the election and the period of electoral silence contemplated in the legislation already in force, the Mission was able to verify multiple instances of electoral campaigning by the main political forces. Likewise, government advertising promoting government management in traditional media, including the state channel, was evident. The OAS Mission received multiple claims and complaints from different actors regarding electoral use of public resources and state media.

“These actions, in violation of the ban, continued during election day. The Mission observed systematic actions by high ranking public officials in appearances in the press and official digital platforms, issuing statements of an electoral nature, and took note of the sanctioning process that the Supreme Electoral Tribunal (TSE) opened against the head of the executive branch.

“During the days prior to the election, the Mission was present in 13 of the 14 departments of the country, while, during election day, it was deployed in the departments of San Salvador, La Libertad, Santa Ana, San Miguel and Sonsonate, which make up 63.4 percent of the voting population.

“This deployment made it possible to verify generalized delays in the installation of the polling stations, which reached 100% shortly before noon, as well as long lines that formed during the day and that generated crowds in the voting centers, which made it difficult to implement some of the biosafety measures designed to preserve the health of the population,” the OAS said.

The members of the Mission said that they were aware of controversies registered in various polling stations regarding the verification of credentials, the denial of entry of party representatives and journalists to the voting centers, as well as difficulties for the vulnerable population, such as older adults, trying to cast their vote preferentially and confusion regarding the closing time of the voting centers. However, it should be noted that the day progressed without major setbacks once the polling stations were installed, with a large presence of monitors from political parties, national and international observers, and members of the press.

“The Mission observed a lack of standardization in the vote counting procedures and a low level of training on the part of the polling station staff. There were delays in the start of the count due, firstly, to the nature of the voting and counting system, which is highly complex. The Mission observed that, at some stations, in addition, votes were first counted manually and, later, the technological system was used in which the count was repeated. Nevertheless, this technological implementation considerably reduced the time needed to process results compared to previous exercises and made it possible to process 82 percent of the records by 8 am the following day,” however, “It should be noted that the TSE website was saturated towards the end of the day, which prevented citizens from having direct access to official information. However, this information was available continuously to representatives of the media, political parties and other actors present at the TSE facilities.’

The Mission reported that it appreciates the financial contributions of Canada, South Korea, Spain, the United States, France, Italy and the Dominican Republic, which made this deployment possible.

“In the coming days, the Mission will keep an eye on the progress of the official count and will present the preliminary report on the electoral process as a whole. In this context, it calls on citizens to wait patiently for the dissemination of the results and for political actors to behave responsibly and settle their differences through institutional channels.”

After its general election, Trinidad and Tobago’s racist underbelly is showing