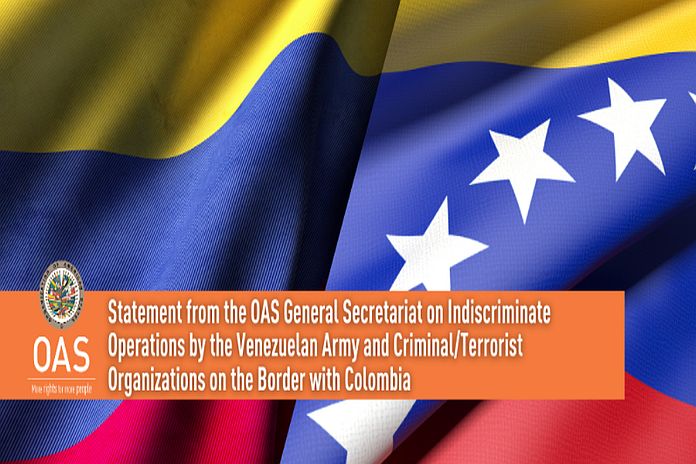 WASHINGTON, USA – The General Secretariat of the Organization of American States (OAS) says it rejects the terms of the notes that the Venezuelan dictatorship has sent to the United Nations Security Council on the tensions and hostilities on the Colombian-Venezuelan border, in the departments of Arauca and Apure.

“It is a strategy of deceptive arguments, disinformation and propaganda that seeks to divert the attention of the international community and avoid its own responsibility, something common in the Chavista/Madurista regime. At the same time, the dictatorship intends to blame, without proof or justification, the government of Colombia for the events that occurred in Venezuelan territory and to tarnish the progress that the country has made toward peace, requesting that the issue be addressed on the occasion of a meeting to discuss issues related to the UN Verification Mission in Colombia,” the OAS General Secretariat said in a statement.

“On the contrary, the events denounced, which include aerial and artillery bombardments and attacks against the civilian population with explosive weapons and looting, are a direct consequence of the indiscriminate operations of the regime’s military apparatus; actions that, in turn, are explained by the complicity of said regime with criminal and terrorist actors who are present in Venezuelan territory enjoying total impunity.”

According to the OAS General Secretariat: “The actions of the dictatorship are part of the systematic forced exodus of Venezuelans and the detachment of the Venezuelan regime from international law and human rights, which has already caused, among other consequences, the departure of more than 5.6 million Venezuelans from their homeland.

“The General Secretariat urges the international community to redouble its efforts to address the current displacement of the civilian population in the area of the Departments of Arauca and Apure, in Colombia and Venezuela respectively, which is part of the tragic humanitarian situation that the Venezuelan people are experiencing, and that has produced the most serious refugee crisis ever to have occurred in the Americas.”

CARICOM Secretary-General to be installed: Construction of official residence ongoing