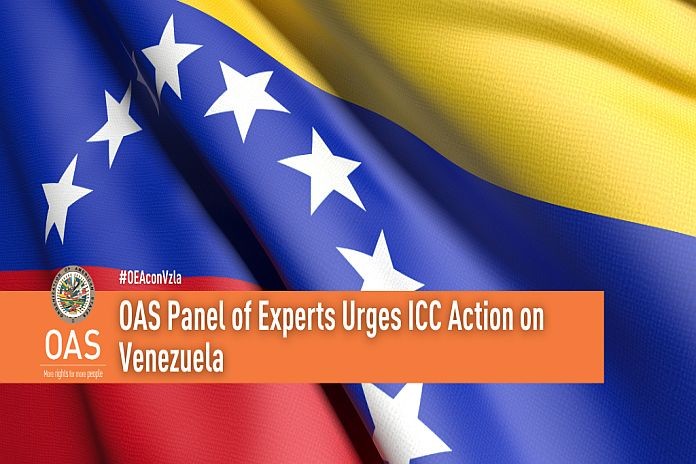 WASHINGTON, USA – The OAS panel of independent international experts on the possible commission of crimes against humanity in Venezuela (hereinafter, the Panel) takes note of the document presented by the then-prosecutor of the International Criminal Court (ICC), Fatou Bensouda, which had remained confidential until now. In this document, Bensouda ratified the conclusions presented by this Panel in its May 2018 report on the existence of crimes against humanity in Venezuela and the fulfillment of the requirements for opening an investigation into the situation.

The then-prosecutor reiterated her conclusion that there exists a reasonable basis to believe that crimes under the jurisdiction of the Court had been committed and considered that the complementarity requirement was satisfied, and therefore, it was necessary to open the investigation. She concluded that the potential cases that could arise from the investigation would be admissible under the Rome Statute.

According to this position, which coincides with the views expressed by this Panel, the cases would be admissible due to the inaction of the Venezuelan justice system, evidenced by the limited number of domestic proceedings relevant to the potential cases identified by the prosecutor’s office and the lack of concrete measures to establish criminal responsibility in these cases. In relation to the investigations that have been opened, the office of the prosecutor concluded that these cases are vitiated by a lack of will or capacity to genuinely carry out the proceedings.

The Panel stated in its 2018 report that according to the information available at that time: “the criminal investigations or proceedings initiated were directed against marginal or low-level perpetrators, even though the Panel has shown that there is evidence against the persons ultimately responsible for the most serious crimes that have been committed. This type of State response, which pretends to deny the existence of a State policy to create the semblance of justice, implies a form of inaction that mandates the opening of an investigation.”

Regarding the lack of independence affecting the judiciary in Venezuela, the Panel highlighted in its report numerous pronouncements by the Inter-American Commission on Human Rights (IACHR) warning about this situation and referred to three convictions by the Inter-American Court that evidenced “a widespread pattern of lack of judicial independence.”

The Panel notes that following the conclusive determinations of the former prosecutor – as evidenced in the publication of her confidential observations-, any proper proceedings concerning those most responsible for the crimes committed in Venezuela have still not been initiated. As no significant progress has been made since the secret findings of the outgoing prosecutor – neither by her office, nor in Venezuela – immediate ICC action is needed to promote justice and accountability in Venezuela.

Canadian immigration in 2020: Expect a big year for provincial and...