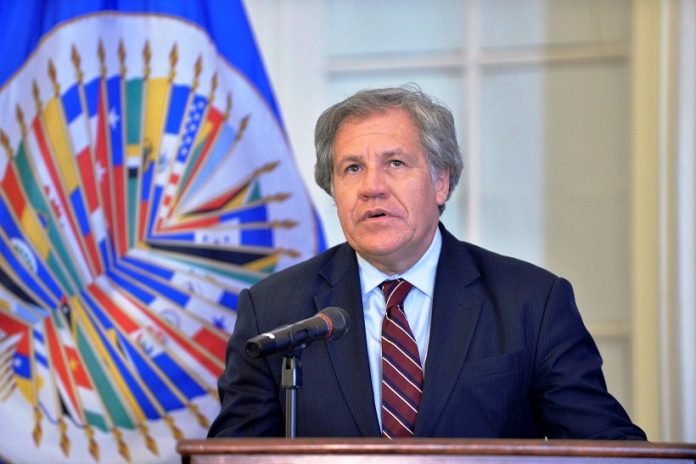 USA / PERU – In response to the invitation extended by the government of Peru, the secretary-general of the Organization of American States (OAS), Luis Almagro, arrived in Lima on an official visit on November 30 and December 1, 2021, on the occasion of which a working meeting was held with the minister of foreign affairs, ambassador Oscar Maúrtua de Romaña.

The foreign minister and the secretary-general agreed in affirming the importance of the OAS as the central institution of the Inter-American system. They highlighted that the four pillars of the organization’s work -democracy, human rights, multidimensional security and integral development- comprise fundamental aspects of the life of the States of the Americas and their relationship, as well as the conviction to strengthen their work to care for the needs of the citizens and peoples of the hemisphere.

They underlined the relevance of the Inter-American institutional and legal framework for the protection of human rights and the validity of the freedoms and fundamental rights of citizens, as well as the importance of encouraging all countries of the Hemisphere to adhere to instruments such as the Pact of San José and the institutions of the Inter-American System of Human Rights.

They recalled the twenty years since the approval, in Lima, of the Inter-American Democratic Charter, an instrument whose adoption was promoted and led by Peruvian diplomacy, and which has guided the actions of the countries of the Americas for the defense and promotion of democracy. They esteemed the work of the OAS Electoral Observation Missions (EOM), which, in accordance with the Inter-American Democratic Charter, contribute to verifying the free, transparent, and democratic exercise of the right to vote in electoral processes in our hemisphere.

They highlighted the central role of multilateralism in responding to the pandemic, and in this regard recognized the actions carried out by the Pan American Health Organization (PAHO) to promote an equitable distribution of vaccines through the Covax Facility mechanism, as well as the need to meet the objective of universal health coverage and to strengthen the multilateral architecture in this area.

They agreed to continue working to advance the regulations that recognize the existence of rare diseases and that seek to guarantee access to health and the rights of those affected by them.

The minister of foreign affairs announced the forthcoming accession of Peru to the Center for Regional Cooperation for Adult Education in Latin America and the Caribbean (CREFAL). Both agreed that this will expand the opportunities for cooperation, as well as highlighting the ongoing initiatives in this field between Peru and the OAS, for the literacy of adults, the training of teachers in rural areas, to enhance their pedagogical capacities in the use and design of strategies, tools and content for virtual teaching, in places far from urban centers, in addition to the efforts made by the ministry of education.

They highlighted the activities of the Inter-American Network for Labor Administration (RIAL) and were comforted by the participation of Peru and the development of two cooperation proposals that it has presented. They purposely stressed the imperative of promoting and protecting workers’ rights, including their formalization, for the consolidation of democracy and development in the region.

They recalled that 2022 will commemorate the twentieth anniversary of the signing of the Inter-American Convention against Terrorism and welcomed Peru’s suggestion to hold a meeting of the States Parties to said Convention, formulated as an expression of its firm commitment in the fight against terrorism and to continue strengthening the work carried out by the Inter-American Committee against Terrorism and its executive secretariat, in charge of the OAS.

They agreed to accelerate the process of transfer, from Peru to the Summits of the Americas Secretariat exercised by the OAS, of the platform of the Follow-up Mechanism for the Implementation of the Lima Commitment: Democratic Governance against Corruption, with a view to its maintenance and improvement as heritage of the Summit process. In this regard, they highlighted the interest of the chair of the IX Summit, the United States of America, in giving adequate continuity to the Commitment and the Follow-up Mechanism.

They agreed to work together to ensure the successful completion of the 52nd Ordinary Period of Sessions of the OAS General Assembly, which will take place in Peru in 2022, ensuring that its development and results correspond to the expectations and needs of the peoples and States of the Americas.

Signed in Lima, at the Torre Tagle Palace, on the first day of December of the year two thousand twenty-one.

Breaking up is hard to do