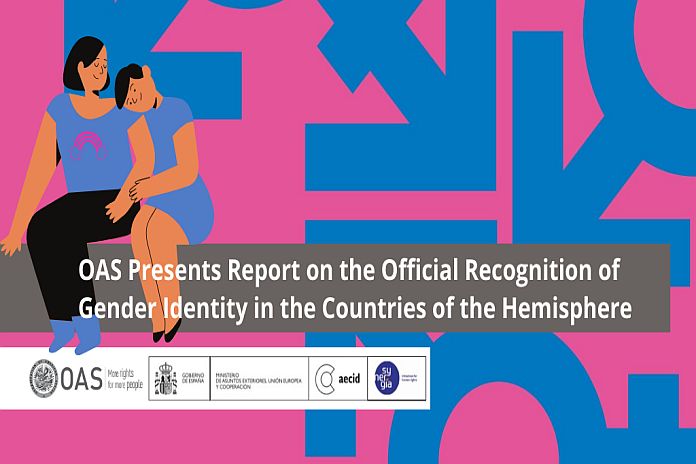 WASHINGTON, USA – The Organization of American States (OAS) and Synergía – Initiatives for Human Rights presented the report “Panorama of the legal recognition of gender identity in the Americas,” a study that details current practices in the Americas to guarantee the right of people to have their gender identity officially recognized as they perceive it. Based on this compilation, the report describes a compendium of regional benchmark practices, as well as the challenges still to be resolved.

The report analyzes the administrative, judicial or mixed nature of the current procedures in each place for the recognition of gender identity. In addition, the report contains a file for each country and jurisdiction analyzed, with specific information in each case on:

The report “Panorama of the legal recognition of gender identity in the Americas” starts from the recognition that the Americas is the most violent region in the world toward people with non-normative gender identities and that these cycles of violence, present in all areas of transgender life, are intermingled with high levels of discrimination and stigmatization, resulting in lack of access to civil, political, economic, social, cultural and environmental rights.

In addition to these cycles of discrimination and violence, people with non-normative gender identities in the region face enormous, often insurmountable, obstacles in accessing identity documents that correspond to their self-perceived gender identity. This constitutes a serious violation of a fundamental right. “The right to identity is relevant not only in itself, but it is also a necessary condition for access and exercise of the rest of the rights, so the absence of regulatory frameworks and institutional practices that allow and promote the recognition of the gender identity, an essential component of the right to identity, can lead to the virtual disqualification of the rights of populations with non-normative gender identities,” notes the report.

The preparation of the report is part of the project on civil registries and recognition of gender identity coordinated by the OAS Program for the Universalization of Civil Identity in the Americas (PUICA is the acronym in Spanish). This publication is expected to facilitate and promote the exchange of knowledge and experiences among OAS member states, and to contribute with a tool that allows civil registries in countries to strengthen their role in guaranteeing the human rights of citizens, including recognition of self-perceived gender identity.

As part of the same project, the OAS also published the document “Guidelines for the implementation of Advisory Opinion No. 24 in the framework of the legal recognition of gender identity,” a guide to support member states in the implementation of the Advisory Opinion 24/17, adopted by the Inter-American Court of Human Rights on November 24, 2017, which establishes that States of the Americas are obligated to guarantee the right to recognition of gender identity.

In order for the guidelines established by the Inter-American Court to be implemented, the document affirms that the civil registry institutions of the OAS member countries must adopt accessible, expedited and confidential procedures that allow for the complete rectification of mentions of the name, sex/gender and image in people’s identity documents in accordance with their self-perceived gender identity. The guidelines document seeks to assist member states with recommendations addressed to the civil registry and identification institutions of the region, presenting in an accessible and simplified way the Inter-American standards for the design of procedures for the recognition of gender identity in documents and identity records.

The two publications can be found at the site of the Latin American and Caribbean Council for Civil Registry, Identity and Vital Statistics (CLARCIEV), in addition to an interactive digital map that allows classifying national practices according to standards contained in Advisory Opinion No. 24 of the Inter-American Court. Two reports prepared by PUICA are also available there within the framework of the Inter-American Cooperation Mechanism for Effective Public Management (MECIGEP) at the request of the General Directorate of the National Registry of Population and Identity (RENAPO) of the Government of Mexico, as well as the General Directorate of the Civil Registry of the State of Jalisco (Mexico).

The project on civil registries and recognition of gender identity coordinated by the OAS PUICA Program has financial support from the Spanish Agency for International Development Cooperation (AECID).