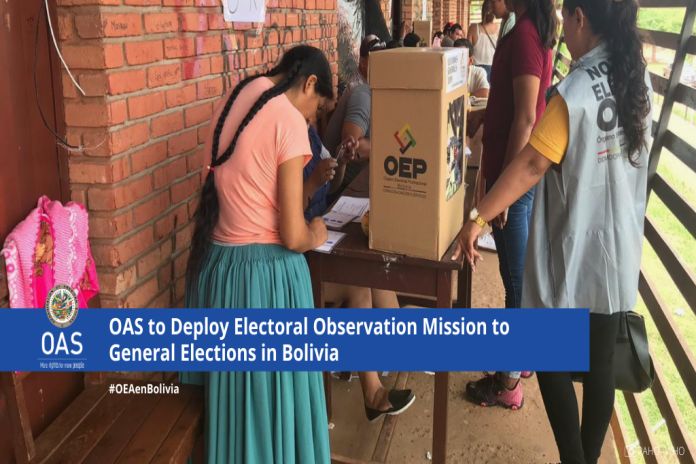 WASHINGTON, USA – At the invitation of the government of Bolivia, the Organization of American States (OAS) will deploy an Electoral Observation Mission (EOM) to the elections to be held on October 18 in the country, for the posts of president, vice president, senators and deputies. The Mission will be led by the former foreign minister of Costa Rica Manuel González.

The Mission will be made up of more than 30 experts in electoral organization and technology, political-electoral financing, political participation of women, electoral justice, statistics, media and social networks, voting abroad, and political participation of indigenous peoples, in addition to observers in the cities of La Paz, Santa Cruz and Cochabamba and, to monitor the vote abroad, in Argentina, Spain and the United States.

Due to the health situation imposed by the COVID-19 pandemic, the Mission will implement a scheme that will allow it to collect information on the ground and will combine face-to-face and virtual components to facilitate interaction between the main actors of the election and comprehensively analyze the technical aspects of the process.

The base group, which includes the chief of Mission, will arrive in Bolivia in the days prior to the election and, during their stay, will meet with electoral authorities, government representatives, political parties, candidates and representatives of civil society, always with strict observance of health protocols, including physical distance and the use of masks.