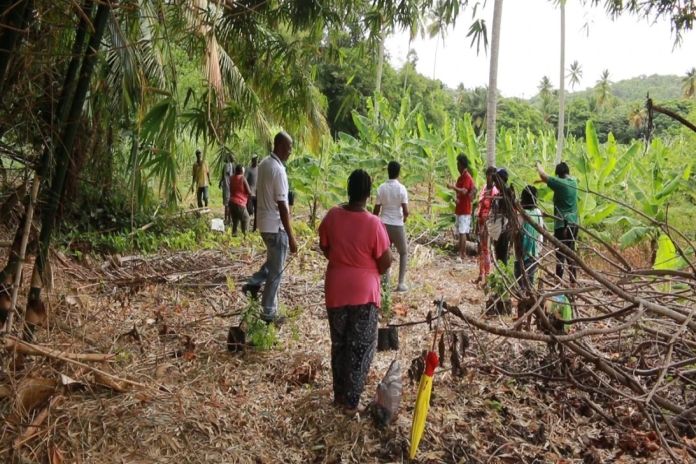 Mitigation work in the Malgretoute area of Micoud, Saint Lucia, has been ongoing for the past two years. The project sought to engage members of the community, both in the performance of project activities and in the transfer of knowledge, to better maintain the watershed and riverbank.

The riverbank stabilisation and reforestation initiative along the Fond/Malgretoute River has been a large part of the project. This week’s closing activity facilitated the participation of community members in the replanting initiative. Additional Cocoa, Citrus and Mango trees were planted along weakened areas of the riverbank to prevent further soil erosion and as a source of future revenue for the farmers.

Josette Edward-Charlemagne, programme officer in the OECS environmental sustainability cluster, supervised the project from its initial sensitisation and tree planting phase in 2018 and expressed satisfaction with the progress to date.

“The trees that were planted at the beginning of the project are growing well and some have even begun to produce fruits.”

“We have actively encouraged the participation of students and community members in the replanting initiatives as it provides an opportunity to learn, first hand, how each person can make a real difference,” Charlemagne said.

Support from the Saint Lucia forestry department will ensure the longevity of the project as future replanting initiatives have been organised with community members.

Marcus Peter, forestry officer in the department of forestry, ministry of agriculture, Saint Lucia, said the department decided to get involved to help the community members who were suffering financial losses as a result of extensive flooding.

“Whenever there was heavy rainfall, the people of Malgretoute Community would lose a lot in terms of their livelihoods as many of them plant alongside the riverbank. The flooding has caused financial damage and [community members] have been trying to figure out ways to remedy the situation.”

“The forestry department decided to step in and assist with various replanting projects which would help with the stabilisation of the riverbank, and would also provide some economic relief from what [the farmers] would have lost.”

The main goal of the OECS-CCRIF SPC Malgretoute riverbank stabilisation and reforestation initiative was to replant at least half of the deforested areas along the Malgretoute/Fond watershed and implement measures to stabilise the river banks. The project is estimated at USD $34,100.