Prime minister Keith Rowley refuses to take responsibility for his own callous failure to even take responsibility. His People’s National Movement (PNM) administration has just cancelled a TT$487 million contract to a CGGC, Chinese construction company, by the Housing Development Corporation (HDC), a decision which can cost the taxpayer upwards of TT$305 million in cancellation penalties; and all the leader of the government can say to the media is “It doesn’t matter if I had the housing portfolio.”

Rowley was directly in charge of the HDC as the then housing minister and it is disingenuous of him to tell the country that he was holding a temporary position.

Ministerial responsibility (in Rowley’s case – prime ministerial) is a fundamental constitutional principle in the British Westminster parliamentary system according to which ministers are responsible to the parliament for the conduct of their ministry and government.

He still has not revealed what were the “certain discrepancies” which did not meet Cabinet’s acceptance and approval that resulted in his government cancelling the contract.

And then he moves to defend his golfing pardner, Newman George, HDC’s chairman who he recently appointed chairman of Paria Fuel Trading Company and Guaracara Refining Company Ltd and a director of Trinidad Petroleum Holdings Ltd and Heritage Petroleum Company Ltd, saying it was “We did not put Newman to run the HDC. This is not a Newman George thing.”

Perhaps Rowley should tell the country what, in his mind, are the duties and responsibilities of a chairman of a State-owned entity.

The first line of overall responsibility is the chairman and Rowley is now saying in that position, George does not assume any fiduciary duty to the HDC, the government and the taxpayer. This is most frightening position for the head of government to adopt, especially since it can now be construed to apply to the heads of all State enterprises. If they are not responsible for their action and decision, then who is?

But yesterday’s disgusting performance by Rowley has now become the norm rather than the exception… from his utter vulgar reference and description of the opposition leader (I wonder if his nasty, sacrilegious and total disrespect will draw a response from the PNM’s Women league (or is it acceptable when it does not involve “one of them”) to his attack on the BBC for reporting what was said to the local media by none other than his own minister of communications Stuart Young.

Rowley’s glaring lack of transparency and accountability continue to be a signature hallmark of his administration and his daily rhetoric on an almost daily basis highlights and compounds his level of competence, judgement, management and leadership. 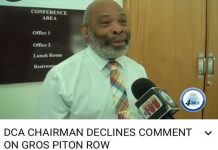 Ten facts you did not know about the DCA