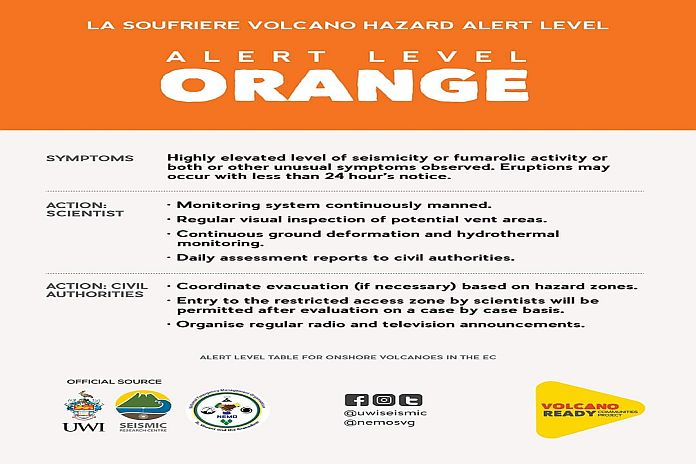 By The UWI St Augustine

TRINIDAD / ST VINCENT — The government of St Vincent and the Grenadines has lowered the volcanic alert level at La Soufrière to ORANGE based on a recommendation from The University of the West Indies Seismic Research Centre (UWI-SRC).

UWI-SRC/MVO Volcano-seismologist and current Scientific Team Lead, Roderick Stewart made the recommendation to the Cabinet on Tuesday, May 4, during his update on the current activity at the volcano.

Stewart indicated that the recommendation was being made given that there have been no explosions at the volcano since April 22 and the number of volcanic earthquakes recorded has also decreased significantly. At alert level ORANGE, the volcano may resume explosions with less than twenty-four hours of notice.

Lahars (mudflows) continue to pose a dangerous threat to the river valleys surrounding the volcano including Wallibou and Rabacca. Mudflows observed over the past several days have contained boulders up to 5m (15 feet) in diameter. Scientists also observed steaming flows, which are likely due to contact with and incorporation of hot volcanic deposits. Lahars can cause damage to property and serious injury to persons in their path.

Access to the RED volcanic hazard zone should be limited to government-approved essential work only. Conditions remain hazardous and the potential for injury also remains.

The National Emergency Management Organisation (NEMO) and The UWI-SRC continue to be the authoritative sources of information on the eruption of La Soufrière volcano in Saint Vincent.