With virtually no international travel since March 2020, national airlines in the Pacific face mounting financial difficulties. For Pacific Island countries this shock is particularly severe given the weak financial condition of national carriers prior to the pandemic, the reliance of these countries on airline connectivity to support tourism, and limited fiscal space to provide ongoing or future financial support to these airlines.

Recovery from this crisis presents an opportunity to overhaul governance and oversight of national airlines to mitigate future risks, according to recent IMF staff research.

The Pacific Islands are among the most isolated countries in the world. They rely on airline connectivity for tourism, education, employment opportunities, access to healthcare, and delivery of goods and services. This dependence has driven many Pacific Island countries to have state-owned national airlines that cater to both domestic and international markets. The national carrier is typically the sole provider of domestic routes and a major provider of international routes, amounting to over 60 percent of the seat capacity in Fiji, Vanuatu, and Papua New Guinea, and 100 percent of the routes in Nauru.

Financial losses and weak profitability have been long-standing concerns for several Pacific airlines. Only Fiji Airways has made consistent profits over the past six years and is also the only national airline in the Pacific Island countries that is not fully government-owned (Qantas Airways has a 46 percent stake). 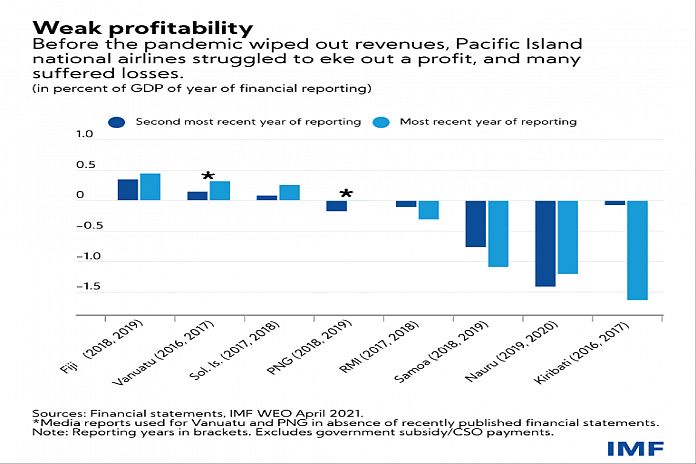 The majority of the national airlines had at least a moderate overall risk rating prior to the pandemic. Many have already been through one or more restructurings and remain extremely vulnerable to external shocks. For example, Air Vanuatu had to be most recently restructured in 2016, following damages from Tropical Cyclone Pam, and is now undergoing another restructuring to recover from the COVID-19 crisis.

Governments have been directly exposed to local airlines by virtue of state ownership and were often providing financial support even before the pandemic. Direct government support has been large relative to GDP in several cases, diverting resources from other development needs. This is in addition to indirect forms of support, such as implicit guarantees on loans from financial institutions such as national provident (social security) funds. However, governments have struggled to monitor and contain the risks from national airlines, reflecting inadequate governance frameworks, lack of oversight capacity, and lack of transparency from the airlines that undermines the ability to assess potential risks. 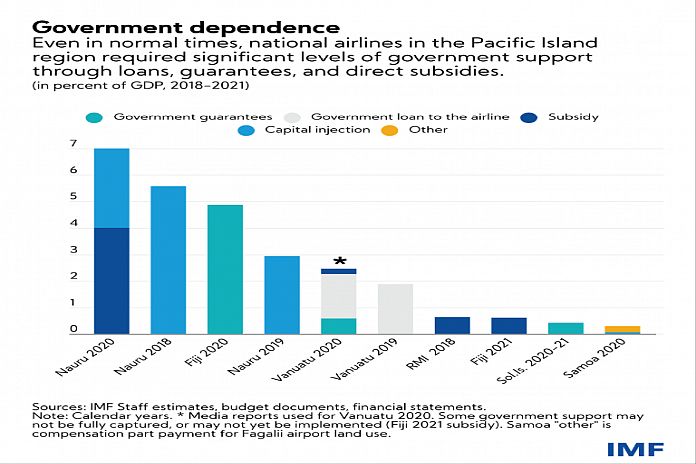 The pandemic has forced governments to increase support of national airlines. Tourism is unlikely to reach pre-COVID-19 levels prior to 2023. Given these conditions, airlines will struggle to improve financial performance in the near term. And for some, their continued losses represent significant quasi-fiscal liabilities. Enhancing oversight and strengthening governance has become more urgent than ever to mitigate risk to government balance sheets.

Greater transparency and accountability in the running of national carriers and rigorous oversight will be critical in the difficult months ahead. Transactions between the government and the national airline should be disclosed in the annual budget and in quarterly budget reports. Audited financial statements of the airlines need to be published in a more timely manner. The majority of Pacific Island countries have an independent oversight unit to monitor and mitigate risks from all state-owned enterprises, including national airlines. Sufficient capacity in these units, along with comprehensive governance laws and effective enforcement are key to effective oversight.