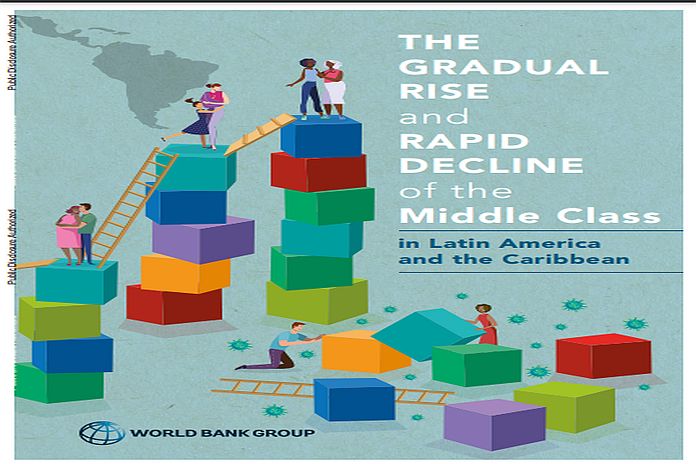 WASHINGTON, USA – The COVID-19 pandemic pushed 4.7 million people out of the middle class and into vulnerability or poverty in Latin America and the Caribbean (LAC) last year, likely reversing decades of social gains, according to a new World Bank report. The impact was even more dramatic if the effect of a massive, temporary social transfer program in Brazil is excluded from the projections. Without that offset from Brazil, a total of 12 million people across the region slipped from the middle class in 2020.

The same holds true for poverty. Regionwide, there were 400,000 less poor in 2020, but without the offset from Brazil, an estimated 20 million people fell into poverty in 2020, with another 1.4 million increase due to population growth , according to The Gradual Rise and Rapid Decline of the Middle Class in Latin America and the Caribbean.

Over the past two decades, the number of people living in poverty in the region fell by nearly half. The middle class (per capita daily income between $13 and $70 per day) surpassed the vulnerable (living on $5.50 to $13 per day) and poor (below the $5.50 per day poverty line) as the largest single group in 2018, but growth stalled in recent years and the region has been one of the hardest hit in health and economic costs during the coronavirus pandemic. In 2020 the middle class fell to 37.3 percent of the population, the vulnerable class rose to 38.5 percent and the poor made up 21.8 percent of the population in LAC.

“The Latin America and the Caribbean region is at a crossroads, and the reversal of hard-won social gains is at risk of becoming permanent unless bold reforms are carried out,” said World Bank vice president for Latin America and the Caribbean Carlos Felipe Jaramillo. “The emergency cash transfer supports that helped lessen the impact of the pandemic will not be sustainable for too long, so the region needs to move forward with policies that will ensure a strong recovery and bring about a more sustained, resilient and inclusive growth that will combat persistent poverty and inequality.”

While mitigation measures including social protection programs helped limit the negative impacts in the short term, without a fast and inclusive economic recovery and similar levels of mitigation measures, poverty may rise again in 2021. Ensuring broad access to vaccines, developing efficient and effective systems to distribute and administer them and fortifying health systems across the region will be key to the recovery.

“Those who were worse off to begin with will likely be the most affected, leading to increases in income inequality in an already very unequal region,” said Ximena Del Carpio, practice manager for the World Bank poverty and equity practice group. “Access to basic services such as electricity, adequate water, sanitation, and even the internet has become even more essential under lockdown measures.”

However, less than 1 in 4 poor households have adequate sanitation, 9 percent do not have access to electricity, and only 25 percent use the internet at home. Faced with the ongoing pandemic and uncertainty, governments need to prioritize equitable access to essential services.

The lockdowns highlighted the importance of broad internet access and alternative methods of purchasing goods and services. Countries should continue to invest in digital infrastructure to accelerate these changes and enact legislation for the expansion of the digital economy.

In addition, social protection programs should be re-assessed to adjust their reach and incorporate new beneficiaries. Income transfers are helpful to provide vulnerable groups some income security during containment periods, but they are temporary and may not be enough to prevent the sharp decline of the middle class.