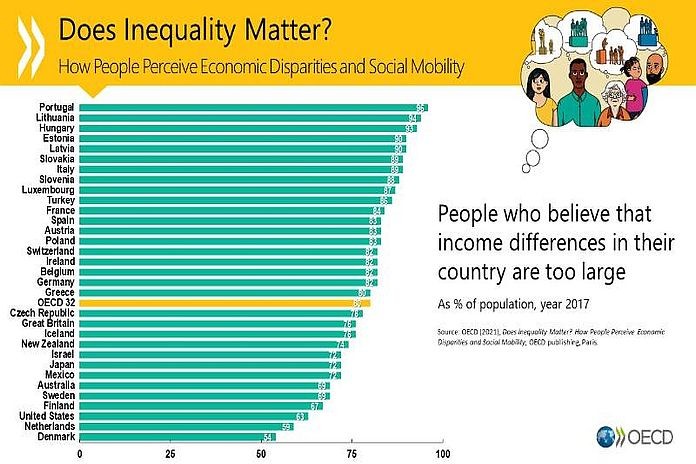 PARIS, France – For a recovery from the COVID-19 crisis that is strong, sustainable but also fair, it will be key to tackle inequalities and promote equal opportunities. Yet while there is growing consensus that inequality is a problem, people are increasingly divided about its extent and what to do about it, according to a new OECD report.

People’s perceptions are not disconnected from reality. Along the lines of observed trends in income inequality, people believed, on average, that top earners earned 5 times as much as bottom earners in the late 1980s/early 1990s, while this perceived top-to-bottom earnings ratio has increased to eight today, after having reached a peak of 10 during the Great Recession. Tolerance for inequality has also increased, though by less. Today people believe, on average, that top earners should earn 4 times as much as the bottom earners, up from three times in the late 1980s.

More than 6 out of 10 OECD citizens believe their government should do more to reduce income differences between rich and poor with taxes and transfers. The more people are concerned about inequality and perceive low social mobility, the higher their demand for redistribution.

However, beliefs about effectiveness of policies and determinants of inequalities matter. People are less likely to demand more redistribution if they believe that benefits are mistargeted, and they are less in favour of progressive taxation if they believe that corruption is widespread among public officials, prompting the misuse and misallocation of public benefits.

Demand for more progressive taxation is also lower where people believe that disparities are justified by differences in personal effort, rather than to circumstances beyond people’s control. For example, in 2018 in Poland 25 percent of people believe poverty is due to lack of effort rather than injustice or bad luck and 54 percent demand more progressive taxation, while in Germany that figure is 4 percent and 77 percent, respectively.

Yet, despite most people being concerned about inequality, they have strongly different beliefs about its extent and what to do about it. Within the average OECD country, one fourth of people thinks that more than 70 percent of the national income goes to the 10 percent richest households, contrary to another fourth who think that less than 30 percent goes to the richest households.

Furthermore, the large heterogeneity of people’s views on inequalities has grown in the last three decades, even among people with similar socio-economic characteristics. There is evidence of growing polarization: in most OECD countries there is an increasing gap between those who believe inequality is high and those who believe it is low. More unequal countries have a more divided public opinion: in Chile and the United States – two among the most unequal OECD countries – the perceptions about the extent of the top richest 10 percent shares diverge the most.

The report is available here.