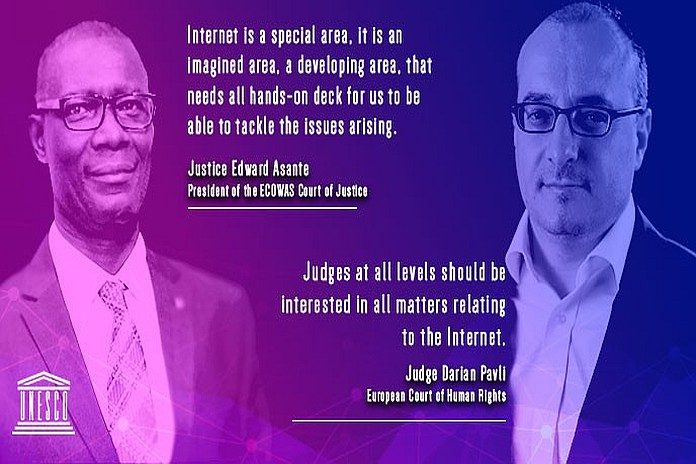 GENEVA, Switzerland, (UNESCO) – During the 2019 Internet Governance Forum in Berlin, UNESCO invited judicial operators on 28 November 2019 for a session to discuss the challenges for judicial authorities in dealing with digital rights and digital ecosystems. UNESCO conducted interviews with Hon. Justice Edward Asante, President of the Economic Community of West African States (ECOWAS) Court of Justice, and Judge Darian Pavli, from the European Court of Human Rights, who took part in this session.

How do you see the importance for yourself, but also for other judges, to be attending the IGF meeting today to increase interaction between judicial operators in this space of discussion on internet governance?

Justice Edward Asante (ECOWAS Court of Justice): It is very important for me personally, and for other judges, to be here because it is a very big space comprised of so many people dealing with law and non-law persons. The perspective of everybody is very important. Judges deal with laws generally, but then, dealing with the internet is a special area, it is an imagined area, a developing area, that needs all hands on deck for us to be able to tackle the issues arising. Because if we leave it, it is going to be a big problem for the whole international community, so it is very important that we be here so that we understand how other people deal with the internet.

Judge Darian Pavli (European Court of Human Rights): Judges at all levels should be interested in all matters relating to the internet because it is too important not to have an interest in it. In my view, individual rights, human rights, and how they are affected by the internet, are complex issues from a legal perspective but not only. They are often also complex from a technical perspective. These notions have social implications and security ramifications and affect practically every aspect of life today. So, if someone is going to make decisions on things that are related to the internet, it will, of course, make a lot of sense to try to understand it better.

In your view, what are the most challenging or most interesting issues (such as hate speech, child online protection, freedom of expression, privacy issues, issues of jurisdiction, technical issues) that you are facing in your court or in your personal experience?

Justice Edward Asante: I think generally freedom of expression issues are very relevant to the internet, and in particular to social media. Because people have their freedoms, they post anything they want on Twitter, on Facebook, and on other platforms. And then some of this content may be very disparaging to other people, some may be hate speech, which also tramples on other people’s rights. But then to even ascertain the liability for the posting, where the person who did the posting is, who is liable, is another special issue which I think we need to look at.

Judge Darian Pavli: At a personal level, I have had an interest in these issues for some time now, and I’ve followed and worked in particular on questions such as blocking of content from the government sites, intermediary liability, and anything that impacts freedom of expression. Every single one of the issues that you mentioned – be it the balance between free speech and respect for dignity and non-discrimination, what we call generally “the hate speech challenge”, other aspects of data protection, government blocking – every single one of those we have had cases at the European Court of Human Rights, and I know that we have more cases pending on these issues, and I am sure we’ll have many more in the future.

How does your court view the challenge of jurisdiction in the digital space?

Justice Edward Asante: Talking about jurisdiction, my court is a human rights jurisdiction, it is an international court, a regional court that deals with matters that happen within Member States from 15 Western African countries. In a way, one may say that if the issue happens in a Member State, once it happens there, they may have jurisdiction. But it is trickier than that because the internet is a global issue. And I think that that is why we are here and that we are listening to the various views of other stakeholders on this matter.

Judge Darian Pavli: I would say, not just national judges, but even international judges, have to decide on the question of jurisdiction. In the case of a court such as the European Court of Human Rights, it is a court that judges the responsibility of states, or state interference with individual rights. And of course, very often the very first question that comes up, especially in a cross-border context, is that of jurisdiction, and that is something that we have to decide on. Just to bring one example: one case decided recently by my court is that of Tamiz v. the United Kingdom, and one of the issues that the British Courts had to decide was whether to accept a defamation lawsuit brought by a British politician who intended to sue Google, which as we know is based in California.

And so, the first question before that British judge, was whether he should allow the defamation lawsuit to go forward. And of course, when it is time for consideration or review [by the European Court] of that decision by a British judge, in Strasbourg, the question of jurisdiction is part of the package as well.

“The session was organized with the support of UNESCO’s Multi-Donor Programme for Freedom of Expression and Safety of Journalists.”