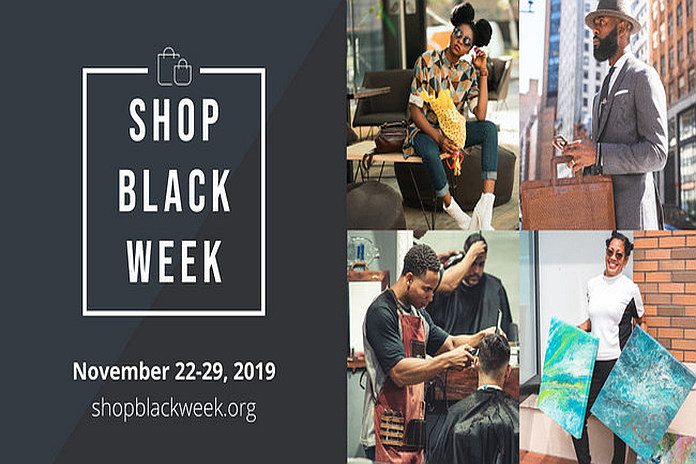 DALLAS, Texas – Approximately 150 groups have designated November 22 – 29, as Shop Black Week, a time of supporting Black-owned businesses. Based on early projections, this is slated to be the biggest movement for Black people in 25 years, by simply asking every American to support Black-owned businesses, making at least one purchase.

“We will need involvement from everyone to make history”, Aysha Jackson, Shop Black Week’s lead coordinator, said;  “So, after you make your purchases, please #shopblackweek and #SBW2019 and tell us about your purchases including business names, locations, dates, and photos.”  “No time in recent history has so many different types of organizations come together for a single cause,” says Charles H. DeBow, III, vice president programs, National Black Chamber of Commerce.

“What we believe is that if every American made a purchase, no matter how small or big, most Black-owned businesses wouldn’t be able to handle the increase, providing evidence that by supporting Black-owned businesses on a regular basis, we could permanently and systematically change the economic condition of the Black community forever,” according to Carla Tillman, PhD, Shop Black Week’s media strategist.

After months of organizing, this nationwide campaign, spread through social media, has amassed well over a million participants based on counts of members, subscribers, and followers, according to organizers, but they request everyone to keep sharing the information until the campaign ends. Maggie Anderson, author of Our Black Year and founder of the Empowerment Experiment Foundation believes that Shop Black Week will be the biggest economic movement of all time as there is already participation in all 50 states.

Organizers want to document this historical movement, so they ask everyone to participate because everyone has a role to play. As a show of solidarity, you can register as an organization, a business or an official supporter at their website, shopblackweek.org. Organizers dream goal is to have larger entities, corporations, celebrities, and politicians join in as official supporters.

“Corporations want our dollars, celebrities want our viewership and politicians want our votes; so, it’s only fair that they give us their support during this movement as well,” according to Phillip W. Dunn, chief executive officer (CEO) at A Seat At The Table, LLC.

To encourage their support, organizers are asking individuals to tweet at your favorite celebrities and politicians asking them to support Shop Black Week.

PepsiCo to provide enhanced benefits, additional compensation to all US employees