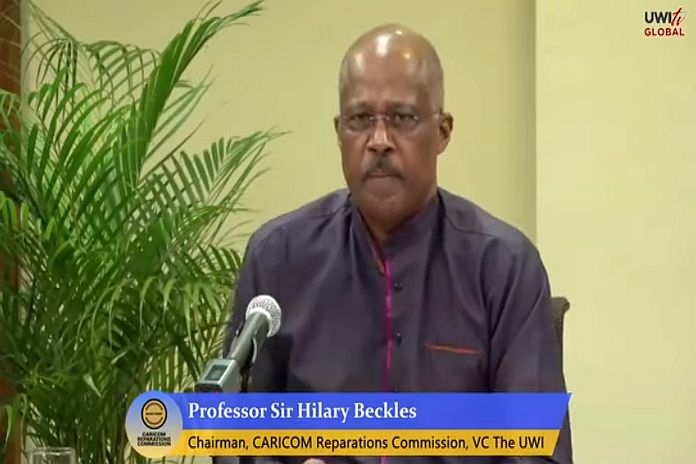 BRIDGETOWN, Barbados, (BGIS) — Without a doubt, the killing of George Floyd, Rayshard Brooks, Breonna Taylor and Elijah McClain in the United States has galvanised thousands of persons to demonstrate against the many injustices faced by persons of colour.

So, too in the Caribbean, it has also served as a call to action for restitution against the centuries of slavery endured by persons of African descent, who were uprooted from their homes and forced to work as labourers in the Caribbean.

From apology to action – CARICOM’s call for reparatory Justice was the topic this week in a virtual discussion to update the media about recent developments in CARICOM’s push for reparatory justice.

Reparations for Caribbean people have now become a front-burner item, with the CARICOM Reparations Commission calling for a three-day, inter-governmental, and civil society summit that would see the way being paved to honour the debt owed to the region.

In the Caribbean, the legacy of slavery can be seen in the rampant poverty that besets many CARICOM member states, with Haiti – one of the poorest nations in the world – being the prime example of the effects of economic rape by France, largely from having to pay 90 million francs ($21 billion) over a period of 30 years to compensate former plantation owners who had lost their property.

CARICOM attests that there is an unpaid and outstanding debt for over 200 years of free labour, which fuelled two industrial revolutions and significant development in Europe, while simultaneously under-developing the nations of the Caribbean and relegating the majority of its indigenous people and those of African descent to persistent, intergenerational poverty.

In her comments, minister Grange told the regional audience: “Our ancestors suffered the most degrading and inhumane treatment recorded in world history, the foundations on which a global, economic and social system evolved. One that perpetually defames and disenfranchises persons of African descent. We will relentlessly pursue justice and reparations in its varied forms.”

Many governments are calling for an apology, but Sir Hilary maintained: “Apologies are not enough. Apologies are precursors for reparations. Apologies are signals of intent to participate in a reparatory process. Apologies are stage one of an effort that says we acknowledge the harm we have caused, and we are prepared to enter phase two – a discussion and a negotiation about how to repair that harm, and that suffering that continues to be the legacy in the Caribbean today.”

Sir Hilary admitted that the British Government had absolutely no intention of redressing the evils of slavery. Instead, he said their goal was to exit colonization and its legacies as cheaply as possible, “without responsibility” and “walk away and not look back”, with other former colonial nations suggesting that Caribbean people should “move on” and “get over it”.

Acknowledging that the governments of the region have “done well” in the face of the circumstances, Sir Hilary said one of the real legacies of slavery has been the pandemic of chronic diseases in the Caribbean – hypertension and diabetes, acknowledging that “over 60 per cent of all of the people in the Caribbean to date over the age of 60 have either hypertension and diabetes, or both”.

Since 2013, the CARICOM Reparations Commission has been assiduously seeking reparations for Native Genocide and African Enslavement, from the former colonial nations – the United Kingdom, France, Spain, Denmark, Germany, the Netherlands, Portugal, Norway, Sweden and Switzerland.

As part of its recommendations, the Commission has come up with a 10-point strategy that would see, among other things, monies for research, collective action and cancellation of part of the region’s debt.