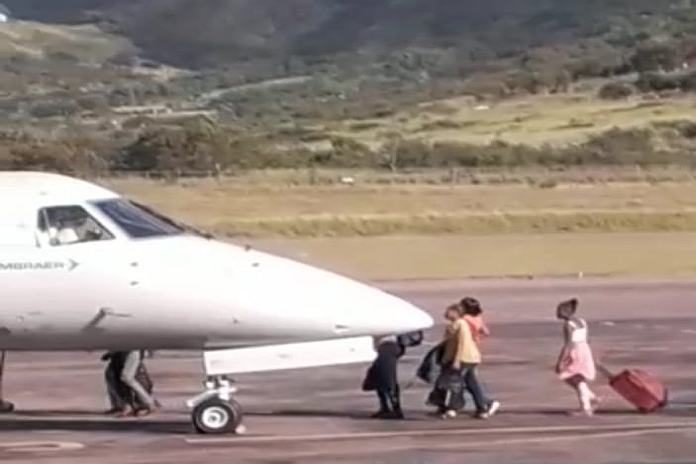 The Haitians who arrived here by sea in two waves over three days were placed aboard two chartered flights that touched down at the Robert L Bradshaw International Airport around 7:40 a.m.

Repatriated from the first boatload were 15 Haitians – 13 males and two females  – one of whom is pregnant, and who were arrested by police “after they arrived at the country’s shores by boat and attempted to check into a hotel without first clearing Immigration and Customs.”

The SKNIS news release said “the boat that brought them to Basseterre, St Kitts had left the island of Dominica where they had been living and working for some time. They also told the St Kitts-Nevis authorities that the boat had been destined for French St Martin. However, according to the migrants, the captain of the boat left them in Basseterre, St Kitts instead, telling them that they had reached their intended destination of French St Martin.”

The second batch of 34 Haitians were assisted by the St Kitts-Nevis Coast Guard on October 23 “after their boat was reportedly in distress.”

“The Dutch Coast Guard, which was patrolling nearby St Maarten and was first on the scene, radioed the St Kitts-Nevis Coast Guard and requested its assistance in rescuing the migrants and taking them to safety to the nearest port, which was Basseterre, St Kitts, in accordance with international standards,” the SKNIS statement said.

“Once rescued on that Wednesday night, the 27 males and seven females (one of whom is a juvenile and two of whom are pregnant) were detained along with the captain of the boat, who is from the island of Dominica and is known to the police there. The captain, who has been convicted previously for drugs, firearms, and smuggling, remains in police custody,” SKNIS stated.

The SKNIS statement did not state the port the second vessel departed from or its final destination.

Both St Kitts and Nevis and Haiti are members of CARICOM and SKNIS said prime minister Dr Timothy Harris had discussions with CARICOM secretary-general Irwin LaRocque, the UN International Organization for Migration, the local Red Cross, the government of Haiti and the local Haitian association.

The Royal St Christopher and Nevis Police Force and the Immigration Department are actively investigating the circumstances surrounding the two incidents involving the migrants’ entry into the country.

I need jobs, not toy horses for the constituents of Castries...